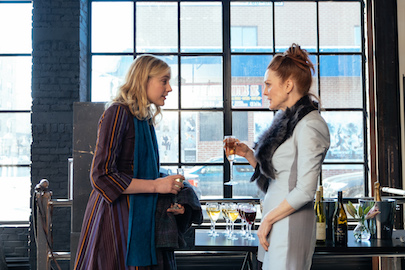 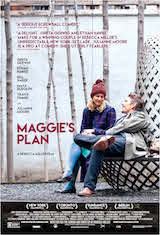 Opening May 13, AWFJ’s Movie of the Week is Maggie’s Plan, the new comedy from celebrated writer/director Rebecca Miller (Personal Velocity, The Ballad of Jack and Rose, The Private Lives of Pippa Lee)

The brilliant Greta Gerwig (Francis Ha, Mistress America) stars as the titular young woman who is firmly in control of her own life, and has decided to have a baby on her own. Her plan is derailed, however, when she falls for the married John (Ethan Hawke), blowing up his marriage to Georgette (Julianne Moore) in the process.

Miller’s first film in six years may sound like it has the premise of a standard rom-com, and its New York setting and cast of misfits owes its influences to Woody Allen and his ilk. But her knowing, acerbic screenplay – which, in a refreshing change from the norm, looks at the sometimes harsh realities of following your heart, rather than your head – and a cast of brilliant actors at the top of their game take this to another level.

Anne Brodie: Maggie’s Plan is a lively and sometimes maddening comedy about growing up – when you’re well past thirty. Great work across the board by Greta Gerwig, JulIanne Moore with a Hungarian accent and Ethan Hawke.

Pam Grady: Rebecca Miller’s first film since 2009’s The Private Lives of Pippa Lee, Maggie’s Plan is a witty, closely observed study of the romantic travails of a charming control freak, played by Greta Gerwig in one of her most effervescent performances.

Leba Hertz: Let’s see if Arthur Miller’s daughter, Rebecca, can live up to the great Salesman