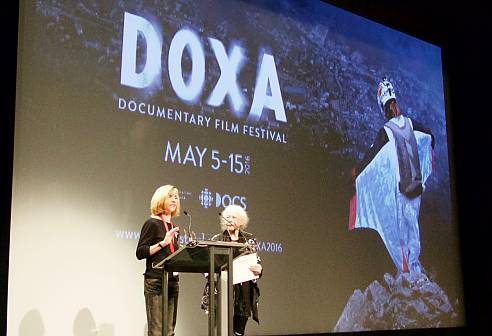 The Alliance of Women Film Journalists attended Vancouver’s DOXA Documentary Film Festival 2016 to present EDA Awards for Best Female-Directed documentary Feature and Best Female-directed documentary short. The festival took place from May 5 to 15. The EDA winners were announced and the awards presented at DOXA’s closing night ceremony on May 14, at The Playhouse in Vancouver.

This is the first year AWFJ has partnered with DOXA to present the EDA Awards for female-directed films at the festival. The awards honor outstanding achievements of women filmmakers working in the documentary realm. Read on…

“We are honored to begin our partnership with DOXA this year, when the festival and its programmers have actually achieved gender parity in the festival program. Congratulations on that rare and wonderful achievement. We hope other festivals will follow DOXA’s example,” said Jennifer Merin, AWFJ president and member of the feature-length jury.

Filmmaker Brett Story’s The Prison in Twelve Landscapes won the EDA Award for Best Female-Directed Documentary Feature. The film is a stunning study on the efficacy and impact of imprisonment in our modern society.

But, first to the podium, Little Rock-based AWFJ member Karen Martin, who covers film for the Arkansas Democrat-Gazette, presented the EDA Award for Best Female-Directed Documentary Short to We Regret to Inform You, co-directed by Heidi Janz and Eva Colmers.

“This film brilliantly demonstrates that there’s no need to shout to make a point. By quietly shadowing Heidi Janz, a laid-off university professor in Edmonton with severe physical challenges, the filmmakers allow the viewer to observe the difficulties of her day-to-day existence, which she undertakes with good cheer and great courage. By seeing how Heidi copes while revealing via unemotional voiceover that the Canada Pension Plan has denied her disability benefits because she is “too productive to receive disability payments,” this film makes a powerful statement to administrators of the Canadian pension system,” said Martin, reading the jury statement.

Janz and Colmers accepted the award with a video in which they described some of the wonder of being able to make the film, and expressing how much AWFJ’s recognition means to them.

Others members of the EDA Award for Best Female-Directed Documentary Short were Lexi Feinberg, Tricia Olszewski, and Lynn Venhaus.

Next at the podium, Vancouver-based AWFJ member and esteemed film critic Katherine Monk presented the EDA Award for Best Female-Directed Documentary Feature to Brett Story for Prison in Twelve Landscapes.

Before handing the award to Story, Monk read the jury statement: The Prison in Twelve Landscapes is a brilliant meditation on all kinds of imprisonment, literal and figurative, earned and unjust. The film builds a case, frame by frame and location by location, for how we’ve allowed fear to become a cottage industry in America. Thoughtful and thought provoking. Impressive and fresh in its approach.”