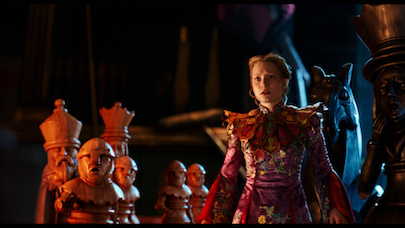 Opening May 27, AWFJ’s Movie of the Week is Alice Through the Looking Glass, which sees Alice (Mia Wasikowska) return to the whimsical Wonderland and travel back in time to save her friend, The Mad Hatter (Johnnie Depp) Read on…

Joining Wasikowska and Depp in director James Bobin’s (Muppets Most Wanted) sequel to Tim Burton’s 2010 retelling of Lewis Carroll’s beloved story are Helena Bonham Carter as Iracebeth, Anne Hathaway as Irana and Matt Lucas as Tweedledum and Tweedledee, along with the first film’s screenwriter Linda Woolerton.

With its stellar cast, which boasts a roster of exceptional women, and stunning visuals, Alice Through the Looking Glass looks set to cast it spell on audiences of all ages.