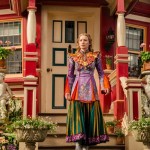 It already promised to be a tough summer season for women-led films, with only three of the bevy of planned blockbusters featuring female protagonists. But it got off to an especially stormy start Memorial Day weekend with the uninspiring sequel “Alice Through the Looking Glass.” Read more on The Week In Women