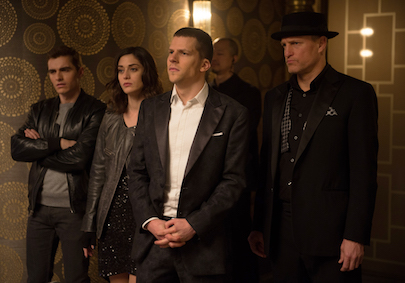 Opening June 10, AWFJ’s Movie of the Week is Now You See Me 2, the sequel to 2013’s hit film which saw a team of master illusionists pull off audacious bank heists during their performances and share the proceeds with their audiences Read on…

That film’s director Louis Leterrier is here replaced by Jon M Chu (G.I. Joe: Retaliation), but original cast members Jesse Eisenberg, Mark Ruffalo, Woody Harrelson and Dave Franco are back in another story that blends awesome magic with a technological heist that’s bigger than anything seen before. Joining them are Daniel Radciffe, as the tech boss determined to get the Four Horsemen to steal a powerful computer chip, and Lizzy Kaplan (Masters of Sex), replacing the departed Isla Fisher as the fourth member of the team.

It’s all ludicrous, of course, and, just like the first film, relies heavily on its sense of feel-good fun to win over an audience. Kaplan is a jewel in the crown, putting in a terrific performance and more than holding her own in this light hearted, undemanding caper.

Pam Grady: It’s pretty much a man’s world of magic in the comic thriller Now You See Me 2, but Lizzy Caplan as Lula, the newest member of the illusionist troupe The Four Horsemen doesn’t just hold her own in a cast that includes Jesse Eisenberg, Woody Harrelson, Dave Franco, Mark Ruffalo, Morgan Freeman, Michael Caine, and Daniel Radcliffe, she steals the show with a fierce, funny performance.