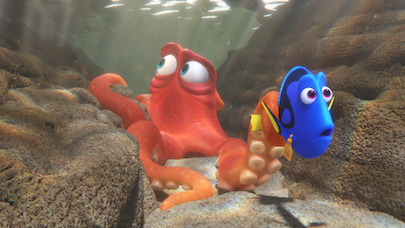 Opening June 17, AWFJ’s Movie of the Week is Finding Dory, Pixar’s long awaited sequel to their 2003 hit animation Finding Nemo, which places Nemo’s forgetful blue fish friend Dory (voiced by Ellen DeGeneres) at the centre of the action Read on…

They are joined by an exceptional voice cast, including Albert Brooks, Diane Keaton, Idris Elba, Dominic West and Sigourney Weaver, who breathe genuine life into Stanton’s razor-sharp screenplay and Pixar’s gorgeous visuals. And it all looks absolutely stunning, of course. Animation technology has moved on in leaps and bounds in the 13 years since Pixar debuted Finding Nemo and the studio uses every tool at their disposal to create a lush and magical under-sea world that will once again enchant audiences of all ages.

Pam Grady: Ellen DeGeneres returns as the little blue tang with short-term memory loss in Finding Dory, the latest Pixar animation to blend comedy and pathos as she becomes separated from her adoptive family and can’t remember how to find them or her own mom and dad.

Nell Minow: Finding Dory looks like the most heartwarming film of the year.

Anne Brodie: Hands down Finding Dory – there are few animated franchises that are as enchanting and powerful as this.

Thelma Adams: Since I am a mother, I would have to say Finding Dory; every mother of small children will inevitably see it.