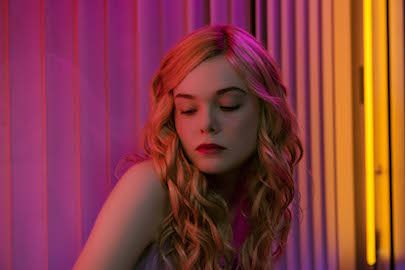 Fanning (Ginger & Rosa, Maleicent, Trumbo) plays aspiring model Jess, who moves to LA seeking fame and fortune. Her youth and beauty make her a star, but also attract the attentions of a group of envious women, headed by the alluring Ruby (Jena Malone) who will stop at nothing to take everything from her.

While Winding Refn’s (who co-writes here with Mary Laws and Polly Stenham) uncompromising, stylised vision has divided critics, there’s no doubt that The Neon Demon is a mesmerising prospect. With the exceptional, chameleonic Fanning to anchor the story, stunning visuals from cinematographer Natasha Braier (XXY, The Rover) and an evocative, Cannes Film Festival award-winning soundtrack from Cliff Martinez, The Neon Demon is a feast for all the senses.