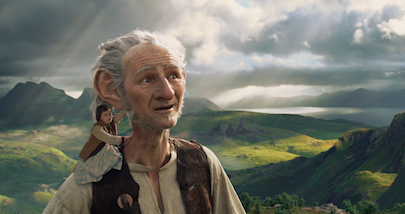 Opening June 24, AWFJ’s Movie of the Week is The BFG, Steven Spielberg’s long-awaited adaptation of Roald Dahl’s beloved childhood classic about the friendship between a small girl named Sophie and a kindly giant. Read on…

Previously adapted for the big screen as an entirely animated film in 1989, Dahl’s fantastical story is ripe for a modern retelling. The narrative is full of magic and mayhem, and undoubtedly still resonant to legions of youngsters and their parents; particularly as it’s been adapted by Melissa Mathison, who also penned such family friendly adventures as E.T The Extra Terrestrial and The Indian in the Cupboard.

Spielberg is also a director who knows just how to bring these sorts of stories to life in a way that will appeal to such a multi – generational audience, and he’s bolstered by a terrific cast including Mark Ryland as the beautifully rendered BFG, Rebecca Hall and Bill Hader, with young Ruby Barnhill taking the role of Sophie

He’s also helped by the later visual effects technology, which will bring the magic of Dahl’s text to glorious life; not least by turning Rylance into the utterly believable gigantic hero of the piece.

Anne Brodie: I am crazy about The BFG. The world created, the story and the fantasies bring to life Dahl’s dream in unexpected ways. Mark Rylance is beyond great.