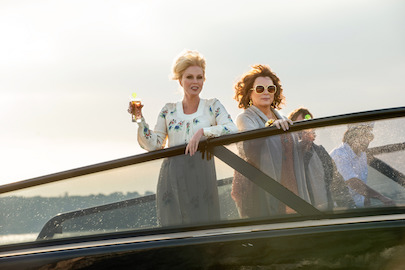 Opening July 22, AWFJ’s Movie of the Week is Absolutely Fabulous: The Movie, the big-screen adaptation of the hit UK TV show starring Jennifer Saunders and Joanna Lumley as fashionista best friends Eddie and Patsy Read on…

From its debut in 1992, Ab Fab became a TV highlight, showcasing exceptional comedic talent from the script to the screen. At the heart of the hilarity is the genuine friendship between Eddie, an insecure fashion PR, and Patsy, an ex-model who finds the meaning of life at the bottom of a champagne bottle.

As the pair, Saunders and Lumley are brilliant; independently hilarious, their dynamic is both outlandish and utterly believeable. This big screen outing, written by Saunders and directed by Mandie Fletcher (TV’s Desmond’s and Miranda, once again puts their friendship front and centre, as the pair are forced to hide out in the South of France after accidentally dunking supermodel Kate Moss in the River Thames. And they are supported by an excellent cast, including series regulars Julia Sawalha, as Eddie’s long-sufering daughter Saffron, Jane Horrocks, as inept assistant Bubble, and June Whitfield as Eddie’s mother.

It all adds up to one of the summer’s absolute must-sees, not just for its laugh out loud, feel-good comedy but also its wonderful celebration of the endearing, exhillerating friendship between two women determined to grow old disgracefully.

Anne Brodie: I have waited for Absolutely Fabulous: The Movie more than most and trust that Pats and Eddie do it right, sweetie darling!