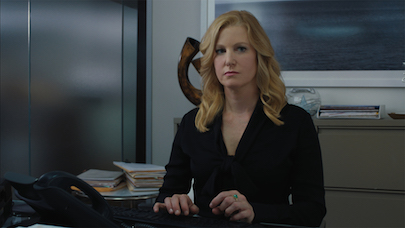 Opening July 22, AWFJ’s Movie of the Week is Equity, the new film from Meera Menon (Farrah Goes Bang) which shines a damning light on what it means to be female in the cut-throat world of Wall Street. Read on…

Breaking Bad’s Anna Gunn plays senior investment banker Naomi Bishop, who is struggling to retain her position in a company that is shedding staff. Desperate to make a deal that will secure her future, Naomi instead comes up against corruption on a major scale.

Written by debut screenwriter Amy Fox and actress/writer Sarah Megan Thomas (Backwards), the narrative is ruthless in its revelation that women can be as ambitious and money-hungry as men, as evidenced by early allusions to Michael Douglas’ iconic Gordon Gekko ‘Greed Is Good’ mantra. Gunn is strong as the central character, channelling the no-nonsense strength of her Breaking Bad character to put real meat on the bones of this shrewd investment banker.

Nell Minnow: Equity — an all-female-led production with an astute take on the world of Wall Street.

Candice Frederick: Not a perfect movie, but what Equity does well is start a conversation about the depiction of women in business. And it’s directed by a woman of color, which is a double plus.