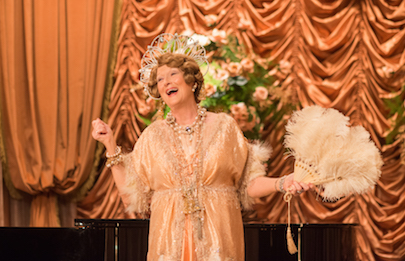 Meryl Steep adds another character in her pantheon of infamous dames — be it Margaret Thatcher, Julia Child, or Emmeline Pankhurst. This time it is an actual operatic grande dame in the form of Florence Foster Jenkins. The indomitable Jenkins came to fame (or more correctly, infamy) as an operatic soprano of highly dubious talent but soaring amounts of hubris and delusions of grandeur on a Wagnerian scale. Read on…

Director Stephen Frears brings a champagne bonhomie to the proceedings. Hugh Grant as St. Clair Bayfield, Jenkins’s common-law husband-cum-manager, and Simon Helberg as her accompanist Comsmé McMoon, add thespian luster, but make no mistake, this is a Streep show. The actress channels her considerable abilities to bring Jenkins to full-throated life, embodying pathos along with the singer’s unique vocal technique. The few recordings that Jenkins made during her career recall a goose in mid-throttle, or a particularly amorous rhino. But La Streep gives it her all, aiming for the rafters with a sound that clears the sinuses.

The narrative is centered around Jenkins’s legendary performance at Carnegie Hall, which attracted the attention of celebrities, artists, and critics, a group who had hitherto been uninvited to the singer’s private performances. The scathing reviews proved so excoriating that Jenkins suffered a heart attack two days after the performance and died a month later. Whether the stylings of a deeply untalented singer will attract audience attention remains to be seen. But the film has a sweet way with its utterly preposterous story and a full-fledged diva at the center to carry the show.