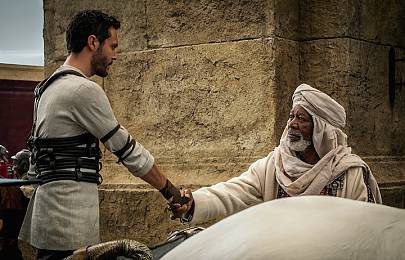 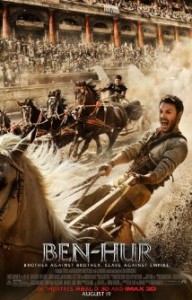 One’s first thought on the remake of Ben-Hur might be “Why, exactly?” The era of sword and sandals epics may have reached a fever pitch in 1959, with Chuck Heston traipsing about in a metal skirt and breastplates, but even in the early days, the camp factor was high. To wit: Tony Curtis and his liquid eyes getting Laurence Olivier into hot water in Spartacus (1960). The genre seems to be periodically rediscovered every few years, with the likes of Russell Crowe (Gladiator), Christian Bale (Exodus: Gods and Kings) and Gerard Butler (The 300) donning the iron miniskirt for a bit of manly action. Read On…

This is a decidedly male film tradition. Women make an appearance, wafting about in silky drawers, and mostly getting murdered in new and exciting ways, so as to inspire the menfolk to bloody vengeance. So, it is here as well. After he is betrayed by his brother and sold into slavery, Judah Ben-Hur (Jack Huston) has a bone to pick. Luckily, he is taken under the kindly wig (holy hairdo!) of Sheik Ilderim (Morgan Freeman). Freedman, whose distinctly American cadences seem woefully out of place, does his usual gravitas shtick as Ben-Hur’s mentor who trains him up for the big race. Add in some mean old Romans, a chariot race that looks like it was lifted from an ancient fresco of The Fast and the Furious (Roman Numeral style) and you have a newly fashioned epic. Even Jesus shows up to say some cool stuff, bruh…

Director Timur Bekmambetov, whose previous work included the largely incomprehensible Nightwatch, and Abraham Lincoln: Vampire Hunter, was inspired to take on the reinvention of the film after reading the script, which he likened to work by Chekhov. You wonder which one he might be referring to, maybe Three Really Violent Sisters, or The Bloody Cherry Orchard.
If you can place your brain in park, or in Roman parlance, tie your horses to a colosseum rung, you might be able to glean some silly enjoyment from Ben-Hur. But unlike its earlier predecessors, this looks to be a rather self-serious affair. There is a lot flailing hair, horsepower, and muscular men yelling ‘YARGHHH!” at each other. If that’s your thing, have at it sister! We’re all Spartacus now.

Anne Brodie: Ben-Hur was a landmark film with original elements never seen before, including that race around the Coliseum. Breathtaking stuff. Curiosity drives me to see what they make of this in the digital age.

Leba Hertz: Even if it’s a stinker, Ben-Hur should bring back memories of Charlton Heston, which may be a good or bad thing.

Other Movies Opening the Week of August 15 to August 19, 2016
Edited by Sandra Kraisirideja, AWFJ.org Associate Editor. Written by Dorothy Woodend