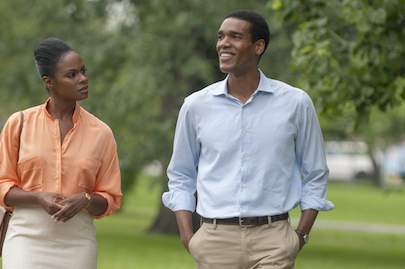 Southside With You is a love song to America’s first couple, Barack and Michelle Obama. In the fall of 1989, long before history anointed them, the pair met as colleagues at a Chicago law firm. Twenty-eight-year-old Barack (Parker Sawyers), Harvard graduate, summer associate, and secret smoker, has eyes for Michelle Robinson (Tika Sumpter), second-year associate, would-be-world changer, serious woman. She is his supervisor. He is her junior. At the outset of their day, Michelle is explicitly clear that this is not a date. And so, it begins. Read on…

A visit to an art gallery is followed by a community meeting, wherein the young Barack unleashes his eloquence and empathy. Michelle’s certitude begins to shift in the face of his passion. The rest of the non-date (a drink, a movie, and a lot of conversation) unwinds in easy fashion, and ends exactly as it should with a perfect, nay, legendary kiss.

Richard Tanne’s elegant film does not stray into the hagiographic, but maintains a level of calmness, and intelligence, buoyed along by extraordinary performances from the two leads. The future that is hovering in the distance for these two adds a certain frisson to the proceedings, but there is a great deal of pleasure to be derived from simply witnessing to two intelligent and charming people walk and talk to each other. It certainly worked a treat in Richard Linklater’s trilogy of films. Here it is leavened with a touch of reality, into something even more interesting, a genuine and humanizing portrait of a relationship, gossamer in its fragile beginnings, that will one day change, the world.

Just don’t expect a Republican rebuttal film anytime soon. Donald Trump’s three marriages and however many sexual indiscretions might have the makings of a good horror film, but a genuine heartfelt romance, not so much.

Neil Minow: Southside With You is the falling-in-love movie most films handle with a pop song and a montage, smart, touching, lovely.

Candice Frederick: Southside With You: In a sea of white romantic dramas and comedies, it’s nice to see a romance film with black leads that sees them as human and not victims or political statements.