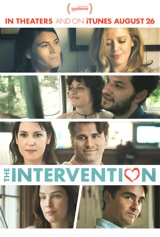 The Intervention is the tale of four couples coming together for a party weekend, and though one is a lesbian couple, that still leaves three men in the mix whose manpain could end up dominating the story, as typically happens. Not here. This is all about the relationship problems of two women — problems they won’t even admit to themselves exist, never mind problems they’re avoiding — even as they plan to try to fix the marriage of a third woman. The wisely observant script — by star Clea DuVall, who also makes her debut as director — is all about that push-and-pull desire to help our friends while also trying to avoid hurting them in the process… Read more>>