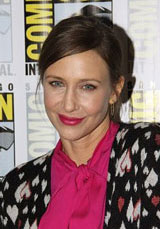 Vera Farmiga earned an Oscar nomination as well as AWFJ, BAFTA, Broadcast Film Critics, Screen Actors Guild, and Golden Globe nominations for her outstanding work in 2009’s Up in the Air. But that was just the tip of the awards iceberg as Farmiga’s been recognized for her impressive work in diverse roles by film critics and awards organizations worldwide throughout her 20+ year career. Read on>>.

Farmiga expanded her work in films by stepping behind the camera to direct Higher Ground in 2011, with the AWFJ recognizing her feature film directorial debut with a “Best Woman Director” nomination. Discussing why she dedicated her energy to bringing Carolyn S. Brigg’s 2002 memoir This Dark World: A Memoir of Salvation Found and Lost to the screen, Farmiga told NPR, “It’s rare to encounter really, fully dimensionalized portrayals of women as I know women to be. I want to see women relating to each other more in the ways that have been very helpful and integral in my life. When I look at female characters, I want to recognize myself in them: my trials, my tribulations as a mother, as a lover, as a daughter. I want to see the things that I struggle with. I want to see the murky stuff.”

That dedication to seeing “the murky stuff” has driven Farmiga to take roles in films including 2002’s Love in the Time of Money, 2004’s Down to the Bone, 2004’s The Departed, 2008’s The Boy in the Striped Pajamas, and 2009’s Orphan. Farmiga took on the role of real-life paranormal investigator Lorraine Warren in 2013’s The Conjuring and its sequel, 2016’s The Conjuring 2, expanding her fan base by introducing the critically acclaimed actress to horror genre enthusiasts. 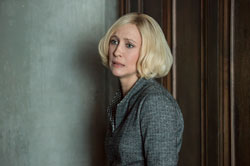 Farmiga delved further into the part of a woman struggling as a business woman and single mother with her lead role in A&E’s Bates Motel. The series, which will end with its upcoming fifth season, is inspired by Psycho and explores the relationship between a younger Norman Bates (played in the series by Freddie Highmore) and Norma Bates (Farmiga). Farmiga earned an Outstanding Lead Actress in a Drama Series Primetime Emmy nomination for playing Norma, but more importantly she earned the respect and adoration of her co-stars Highmore, Nestor Carbonell, and Max Thieriot. Farmiga hasn’t directed Bates Motel, however Carbonell says it’s because of her that he has been given the opportunity to direct episodes of the series.

“It’s been a gift,” said Carbonell when asked about having the chance to direct during our interview at the 2016 San Diego Comic Con. “I never in a million years thought I’d get that opportunity and it really is thanks to Vera. Vera is the one who encouraged me to pursue it. We talked about scenes when we rehearsed scenes in the first season. We talked about blocking. So, she offered that. She said, ‘You really should direct the show.’ I go, ‘I have no experience. It’s crazy.’ She goes, ‘No, you know you could do it.’ ‘I don’t know one thing about camera.’ She said, ‘You really should do it,’ so she encouraged me.”

Wearing Multiple Hats on the Set:

Farmiga is an executive producer on Bates Motel and in that capacity she’s been able to have input into the show and isn’t shy about voicing her opinions. “I’m on set every day making sure that tonally everybody is on the same page. I’ve directed before and the boys will tell you that even though I haven’t directed a single episode I’m always directing them. I’m always bossing people around and doing my thing, and they let me. In that respect I think is where you see ‘executive producer’. I’m always kind of doing backup. It just has been the case,” explained Farmiga at Comic Con.

“This year what I really love is that after I directed Higher Ground, I think one of the most enriching experiences for me to be a part of where I thrived, and probably if I didn’t do what I do I would be an editor. I love that process, and this year they made me privy to all the footage and I was able to see directors’ cuts and give them my impressions and ideas,” said Farmiga. “That was really fun for me to do as an executive producer on the series.”

Why We Chose Vera Farmiga for the AWFJ SPOTLIGHT:

Vera Farmiga has steadily built up one of the most impressive resumes in Hollywood and yet she’s managed to stay grounded throughout her career. While she prefers to stay off of magazine covers, Farmiga deserves time in the spotlight for her wealth of accomplishments in films and on television.