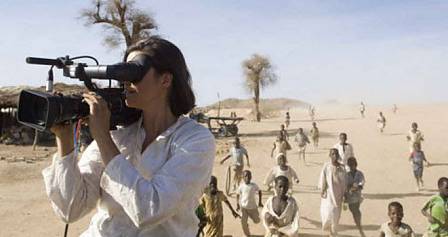 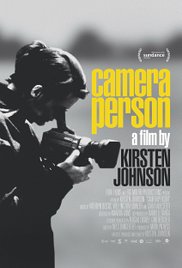 Kirsten Johnson’s film Camerperson begins with a simple quote. “For the past 25 years I’ve worked as a documentary cinematographer. I originally shot the following footage for other films, but here I ask you to see it as my memoir. These are the images that have marked me and leave me wondering still.”

During her remarkable career, Johnson has amassed a collection of outtakes, B-roll footage, and setup shots from the many films she has shot. From this vast repository, she collages a masterful homage, not just to documentary cinema, but to life itself, in all its humble, staggering and often horrifying beauty.

This is a film that demands repeated viewings, as each time you watch it, something new becomes apparent. A masterpiece of editing, the placement of scenes dovetail together to form a greater narrative about the value of memory and the importance of art. Whether she is documenting the effects of genocide, or the first moments of life for a newborn baby, Johnson’s camera functions as a tool to construct meaning, and more importantly to engender empathy and compassion. Along with images and stories from around the globe, she includes scenes from her own life, her twin toddlers messing with the camera lens, or her mother struggling with the effects of dementia. Cameraperson is also a portrait of an artist at work. Off-camera conversations between Johnson and the filmmakers she is working with add a narrative counterpoint to the action captured onscreen.

It is impossible to come away from the experience of this film unmoved. It is a masterwork, a portrait of humanity, a memento mori to love and family and a gloriously kaleidoscopic collage of this place that we call home.

Thelma Adams: Cameraperson – because it’s directed by a woman and it is so very, very hard to break into the cinematographer’s guild if you are female. It takes an extra shot of fortitude.

Dorothy Woodend: Kirsten Johnson has been the eyes and mind behind some of the most iconic documentary films ever made. Her work with Laura Poitras (Citizenfour), Michael Moore (Fahrenheit 9/11) among many others has arguably moved documentary cinema into the public eye in an entirely new way. At the heart of Johnson’s approach is humility, curiosity, and a certain brand of American humanism. Whether she is shooting nurse midwives in an obstetrics clinic in Nigeria or a boxing match in New York City, Johnson brings a virtuosity of technique and an easy open manner, as her camera becomes a means of fixing time and keeping people alive in some ineffable way.

Jennifer Merin: Brava Kirsten Johnson for this incisive, insightful, in depth revelation into your own work and the art of documentary filmmaking from the point of view of the cameraperson whose lens brings us dimensions of reality we might otherwise miss entirely. Its a treat to see Johnson’s archival footage that we hasn’t been used in the many prize-winning documentaries she’s shot, and her commentary is absolutely fascinating. A must see!

Other Movies Opening the Week of September 5 to September 9, 2016