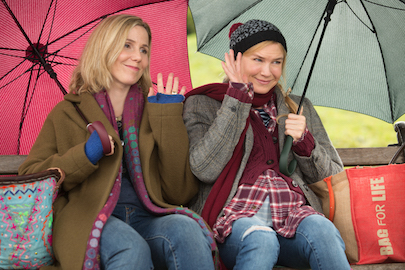 Bridget Jones, patron saint of single ladies is back. Long before the film entered theatres, it had picked up a small firestorm of controversy over its star’s changed appearance. Variety critic Owen Gleiberman shot himself, repeatedly, in the foot as he tried to maintain that Zellweger’s face was, in some fashion, a betrayal of ordinary beauty that had vaulted her to fame in the first two films. Read On…

The actress herself responded in an open letter, stating: “I am not writing today because I have been publicly bullied or because the value of my work has been questioned by a critic whose ideal physical representation of a fictional character originated 16 years ago, over which he feels ownership, I no longer meet. I am not writing in protest to the repellent suggestion that the value of a person and her professional contributions are somehow diminished if she presumably caves to societal pressures about appearance, and must qualify her personal choices in a public court of opinion. I’m not writing because I believe it’s an individual’s right to make decisions about his or her body for whatever reason without judgment.”

So the film comes at an interesting moment in pop cultural history, as women have apparently had it up to the back teeth with the male habit of opining loudly and at considerable length on what women ought to look like. Or not look like. There is apparently no winning, no matter what you do.

In the face of all this (heh!) is the film itself, a return to form, as early reviews have indicated. In this outing, our indefatigable heroine is torn between two lovers, and with baby on board. Bridget navigates the turbulent waters of motherhood, career and both old and new love with the ever-loyal support of family and friends. All fine and good, but the larger issue remains, namely of a woman’s right to exist onscreen, and in the world, without being subjected to a narrowly prescribed set of rules of what is acceptable. And what is not.

Elizabeth Wittemore: Bridget Jones’s Baby: With the success of the first two films and Renée back in the role that made her a household name, this latest addition is sure to be a crowd pleaser. As the character moves forward in age and stage, she continues to be relatable and no doubt funny as ever. Colin Firth is always charming and you cannot go wrong with the addition of dreamy Patrick Dempsey. Each film Emma Thompson has the opportunity to write for outshines the last. Women writing for other women, well, you’ve got one ticket purchased in advance right here.