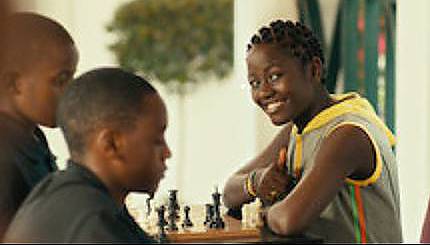 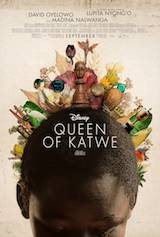 In director Mira Nair’s hands Queen of Katwe, the true story of chess prodigy Phiona Mutesi becomes more than a Disneyfied triumph. The film, based on Tim Crothers’s book of the same title, engages squarely with the reality of life in the Ugandan slum. Read On…

In a recent article for the Guardian, Crothers described the place thusly: “Katwe (pronounced kah-tway), in the south of Uganda’s sprawling, smoggy capital city of Kampala, emerged in the mid-20th century as a place for poor artisans, but developed into the city’s most crime-ridden slum. It has scant sanitation and during the rainy season is regularly flooded with raw sewage, with residents sleeping on their roofs to avoid drowning. If you are born in Katwe, the chances are you will die in Katwe.”

All of which makes the story of Phiona Mutesi more extraordinary. Phiona lost her father to AIDS, and her older sister also died. While her mother struggled to support her family, the real reason Phiona came to chess was hunger. Robert Katende, a former soccer coach, who started a chess program in Katwe enticed would-be players with a free cup of porridge. Katende immediately recognized the abilities of this young woman, and coached her to become a champion.

It is tempting to look at the film as a cleaned up version of events. But despite a narrative tendency to flatten out complexities and saturate every moment of triumph with sweeping strings, the very existence of this film represents a significant change for Disney. A film set in Uganda, and starring actors of colour is itself a radical thing. Nair has the considerable talents of cinematographer Sean Bobbitt (12 Years a Slave) and editor Barry Alexander Brown (Spike Lee’s longtime collaborator) who bring their collective skills to bear in crafting the story. But the actors give the project a heft and emotional weight, especially the incandescent Nupita Nyong’o, who is joined by newcomer Madina Nalwanga.

Leba Hertz: This is a tough one but I’ll go for the inspirational movie, Queen of Katwe. The terrific David Oyelowo and Lupito Nyong’o may have the star power, but watch out for the young woman who plays the chess genius. Step aside gold medalists for this one.

Nell Minow: Queen of Katwe — The true story of talent and triumph

Jennifer Merin: A triumphant film! With great truth-based story in the hands of a brilliant woman director, this film brings women into their rightful place in moviemaking.

Other Movies Opening the Week of September 19 to September 23, 2016