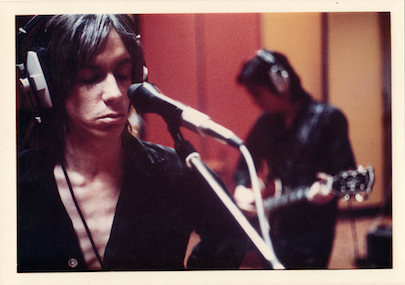 There is a danger in meeting your idols, not only meeting them, but making films about them. The pairing of indie Auteur Jim Jarmusch (Dead Man, Down by Law, Stranger Than Paradise) and Iggy Pop ought to have been a sonic blast that scraped the stage clean and left only a few raggedy bits clinging on. In fact, it is not. Rather it is a perfectly nice film about the rise and eventual implosion of the most seminal of punk acts, old Iggy and The Stooges. Read on…

The number of documentaries made by filmmakers about their favourite bands is somewhat legion at the moment. In recent years, loving portraits about musicians and their craft have dropped with increasing regularity. They range from the mainstream (Oasis, Amy Winehouse, Michael Jackson) to the more obscure (Frank Zappa, The Mekons, The Residents, the Sparks). Even now more films are on their way with musical biographies of Missy Elliott, X Japan and the Slits all slated to hit screens this year.

It is also a particularly male occupation, this need to immortalize one’s musical obsessions in documentary form. Look only to the most famous of these works from The Rolling Stones and the Maysles Brothers to Bob Dylan and DA Pennebaker. There is nothing wrong with that. But it can also make for films that are a little soft around the edges. Love has a way of doing that, coating the lens of even the most serious cineaste. Jim Jarmusch obviously adores Iggy Pop (the film is described as a love letter). But in some fashion this fondness has stayed his hand. The more rotten gritty details aren’t there, and what we get instead is an affectionate, almost mushy, tribute to one of the most rancid punk acts in the history of music.

Leba Hertz: Gimme Danger–Iggy Pop and the Stooges. Ann Arbor’s finest, and now we can hear their story in this documentary.