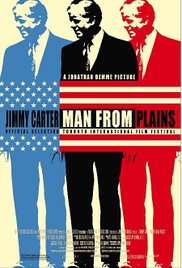 Before director Jonathan Demme signed on to helm a documentary about Jimmy Carter, he negotiated two important points: he would have unlimited access to the former president and he would have final cut of the film. As a result, Demme has produced an unusually intimate, insightful and revealing tribute to an exceptional elder statesman who, now in his 80s, continues to work tirelessly for peace. Demme chose to make the structural spine of his Jimmy Carter tribute the former president’s nationwide tour to publicize his 21st book, Palestine Peace Not Apartheid, in which he lays out his controversial opinion regarding Israeli behavior towards the Palestinian people. Basically, while rebuking Palestinians for provocation and violence towards Israelis, the book effectively faults Israel for encircling Palestinian territories with walls that create ghetto-like imprisonment for the people who live in them. Read my review>>