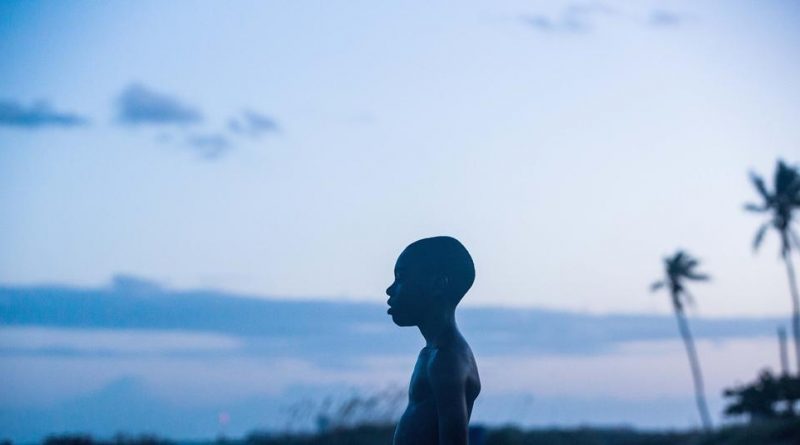 Writer/director Barry Jenkins has created an achingly affecting, incandescent coming-of-age story, told in three chapters, covering 16 years – with three different actors playing the leading African-American character. Growing up in a decrepit, inner-city housing project in Miami, scrawny, fatherless 10 year-old Chiron (Alex Hibbert) has been dubbed “Little” by playmates, who suspect his tendency toward homosexuality long before he knows what the term “faggot” means. Read on…

Hiding from schoolyard tormentors, silent, wide-eyed Chiron is discovered by a kindly, Cuban-born crack dealer, Juan (Mahershala Ali), who offers him a meal and a place to stay for the night at the apartment he shares with his girl-friend, Teresa (singer Janelle Monae).

When Juan drives Chiron home the next morning, he realizes that his mother, Paula (Naomi Harris), is a drug addict. “My momma does drugs?” Chiron asks, trying to comprehend. “And you sell drugs?”

By the time he’s 16, Chiron’s (Ashton Sanders) awkward loneliness has become pervasive. One evening, his only friend, Kevin (Jharrel Jerome), initiates a brief sexual encounter on a beach. But the persistent bullying continues, made even painful when Kevin’s forced to participate.

Skip ahead a decade to Atlanta. Troubled Chiron (Trevante Rhodes) surfaces again, beefed up with gold ‘fronts’ on his teeth, but still grappling with his angst-riddled concept of masculinity.

So when Kevin (Andre Holland), now working as a short-order cook, calls, Chiron drives back to Miami, curious about the hand life has dealt him.

On the Granger Movie Gauge of 1 to 10, “Moonlight” is an anguished 8, shattering stereotypes of the LGBTQ community.