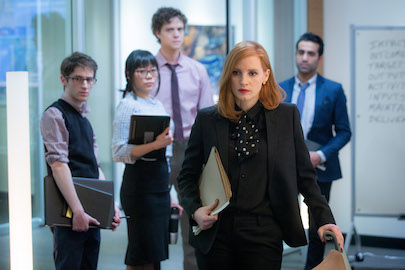 If you have the stomach for corruption in the political arena, then director John Madden’s new drama Miss Sloane might be just the ticket. If you have had your fill of politicking, bad behaviour and ruthlessness in the real world, watching even more on movie screens might seem a little like an extended torture session. Read on…

Madden’s new film had the curious luck to arrive on screens just as drama of the US election continues to escalate into more bizarre new manifestations. Really, who could think this stuff up? If it wasn’t reality, one might swear that some celestial version of Aaron Sorkin was hard at work, dashing off incongruous plot twists and ever more horrifying characters — a white supremacist wife beater in the White House? A megalomaniac conman in a bad suit with the world’s worst comb-over. Sure! Why not…Keep it coming.

As the titular character, Jessica Chastain is all Sturm und Drang, with her copper hair and slash of dark crimson lipstick. The actress gives it everything she’s got, which is considerable. As a lobbyist in a high-powered firm hired to promote the interests of the pro-gun folk, she is always one step ahead of her opponents. But the film is upstaged by real events that continue to unfold in ever more insane fashion. Who needs political drama in the movie theatres, when it is splashed across television screens, facebook posts, and twitter feeds. At some point, it begins to feel a little like overkill.

Thelma Adams: Miss Sloane. This is what I’m talking about: a female-driven drama about the gun lobby starring Jessica Chastain in full flame.

Jennifer Merin: Jessica Chastain’s commanding performance is a chilling indictment of capital corruption. This is flamboyant fiction that mirrors fact.