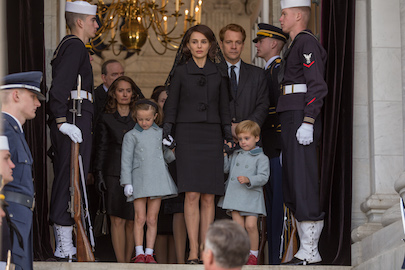 Mythmaking has long been a staple of American movies. Pablo Larraín’s film portrait Jackie tackles one of the greatest of American myths — that of first lady Jacqueline Kennedy. In the week following her husband’s assassination, Mrs. Kennedy granted an interview to Life Magazine. The film uses this as a framing device, and as an almost surgical means to dissect the psyche of its titular character. Read on…

In her interview with the Magazine’s journalist (Billy Crudup) Jackie dictates what can and cannot be published. Even in her shattered and destroyed state, she maintains a commitment to the demands of history, and the idea of legacy, which is perhaps another word for myth. Thus was born the story of Kennedy’s presidency as a golden period, described as “a magic moment in American history, when gallant men danced with beautiful women, when great deeds were done, when artists, writers, and poets met at the White House, and the barbarians beyond the walls held back.”

Pablo Larraín’s cinematic intelligence is amply supported by Noah Oppenheim’s screenplay, but it is composer Mica Levi’s score, with its great wedges of sound, that best establishes the film’s emotional space. It is grief in musical form — shards of it pierce the narrative, creating a profoundly discombobulating feeling. A quality that is met and matched by the film’s kaleidoscopic jumble of past and present, cutting from glittering parties in the White House to the moment when the bullet shatters the president’s skull.

Natalie Portman embodies the first lady fully, right down to her cut-glass accent, and sculpted bouffant hairstyle. The actress’s portrayal is more than simply skillful impersonation. She radiates agony and fragility in high-pitched hum that is more felt than seen. The confusion and numbness that attend great tragedy, where the brain cannot process the changed reality in which it now exists, is most clearly captured in scenes of Jackie drifting through the empty Whitehouse, dressed in a wispy peignoir and smoking compulsively. Here, the quality of fairytale and nightmare combine in startling fashion. The fabled Camelot has become a haunted castle, and Jackie is left alone to find her way out.

Liz Wittemore: Jackie—There is massive Oscar buzz around Natalie Portman’s performance as one of the most elegant first ladies of all time. Women who have grown up with her and emulated her grace as an American figure and style icon, have big hopes that her story will be properly told. Early response suggests all will be well in the land of Camelot with Jackie staying historically accurate in storytelling and beautifully lush in period detail.

Anne Brodie: Jackie‘s Natalie Portman is so incredibly Jackie it’s tough to imagine anyone else in the role.

Leba Hertz: Jackie—Melania will have nothing on this first lady and Natalie Portman delivers big time.

Jennifer Merin: Jackie is a stunning profile of an iconic American woman’s personal fortitude at a time of extreme grief. The film is beautifully crafted and Natalie Portman’s performance is superb.