For the fourth consecutive year, the Alliance of Women Film Journalists was at Whistler Film Festival to present AWFJ EDA Awards to female filmmakers for Best Female-Directed Narrative Feature and Best Female-Directed Documentary. The winners were announced on December 4 at the festival’s awards ceremony at the Maury Young Arts Center. Read on…

AWFJ’s Narrative Feature Jury Chair Katherine Brodsky presented the EDA Award for Best Female-Directed Narrative Film to Canadian director Chloe Lariche for Before the Streets. The jury statement: “The Alliance of Women Film Journalists presents the EDA Award for Best Female-Directed Narrative Feature to a film in which we are observers in a story told with a fully naturalistic approach. We become immersed in the narrative, almost as if a video-camera were chasing real life. As the first film shot in Atikamekw, a dialect of the Algonquian Cree language, it is an engaging portrait of a young man who finds himself in an awful situation, one in which he’s forced to come to terms with his actions. Free of excessive writing and preconceived dramatic notions, Before The Streets is beautiful in the simplicity of its storytelling and performance. We present the AWFJ EDA Award for Best Female-Directed Narrative Feature to Before The Streets, directed by Chloe Leriche.”

Documentary Jury Chair Jennifer Merin presented the EDA Award for Best Female-Directed Documentary to Canadian documentarian Fern Levitt, for Sled Dogs. The jury statement: The Alliance of Women Film Journalists documentary jury commends Whistler Film Festival for programming a controversial documentary that reveals egregious abuse of animals within its hometown and at other locals where dog sledding is a popular pursuit and profitable business. In Fern Levitt’s documentary, we see that some dog owners disregard their animals’ care and comfort, treating them in ways that are tantamount to torture, and then callously kill them when they can no longer serve to satisfaction. Our jury found Sled Dogs difficulty to watch, heartbreaking and unforgettable, revealing cruelties beyond our imagination. We present the AWFJ EDA Award for Best Female-Directed Documentary to the very compelling and well-crafted Sled Dogs, directed by Fern Levitt. This is a documentary that can make a difference for the better.” 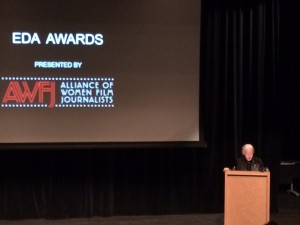 For the full list of films nominated for AWFJ EDA Awards at Whistler 2016, and the names of jurors, see this report.