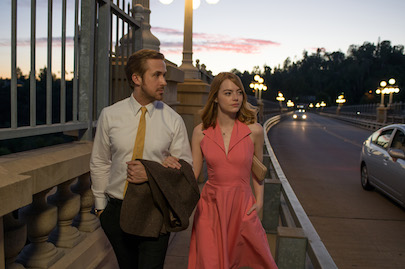 Movie musicals. They come and then they go. And then sometimes they come back again. La La Land, the latest from director Damien Chazelle is an homage to the acid-bright technicolor extravaganzas of old Hollywood. Romantic and swoony to be sure, but leavened with a modernist twist that cuts the schmaltz. Read on…

In a recent New York Times profile, the filmmaker explained the integration of old fashioned singing and dancing with a more hardcore edge. “We wanted the film to feel handmade and human at every step…I wanted everything to bleed, so that gritty real life was magical and the magic was always a little gritty.”

The director’s previous outing Whiplash, a film that catapulted him to considerable attention, was gritty all the way through. Perhaps to a fault, with bodily fluids — blood, sweat and tears – falling on the skins of the central character’s drum kit. Whiplash was also an all-boy’s show with men folk going head to head in grand macho style. Women weren’t really part of the action. But luckily, La La Land gives Emma Stone shared billing with Ryan Gosling. They are a match made in movie heaven, and it seems churlish not to succumb to their combined charisma assault. So, give in already! Chazelle’s film has been greeted with a degree of ecstasy by critics, and certainly it is hard to resist its candy-coloured romanticism. Sometimes escape is exactly what you need.

Pam Grady: There is no sophomore jinx for writer/director Damien Chazelle (Whiplash) as he returns with La La Land, an enchanting romantic musical that is at once retro and contemporary in it depiction of the relationship between a struggling actress (Emma Stone) and sensitive jazz pianist (Ryan Gosling).

Leba Hertz: La La Land. A delightful tribute to movie musicals of the past with Emma Stone and Ryan Gosling giving excellent performances.

Thelma Adams: La La Land because it’s likely to be an Oscar frontrunner and is a musical escape from the current maelstrom.