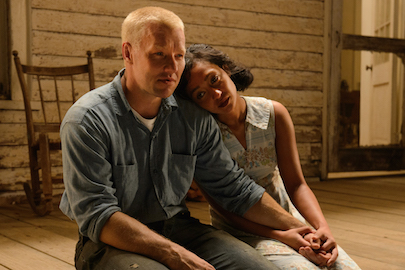 Was there ever a more fitting name in a Supreme Court case than Loving v. Virginia? And was there ever a more compelling legal argument than the one Richard Loving made when his lawyer asked him what he wanted the Supreme Court to know? For Mr. Loving, the challenge to the laws preventing marriage between people of different races was not about precedents or the Constitution. He wanted his lawyer to say just this: “I love my wife.”

Writer/director Jeff Nichols makes Richard Loving and his wife Mildred the center of the story in this quiet, intimate film, with performances of exquisite simplicity and tenderness by Joel Edgerton and Ruth Negga. Nichols’ focus is on the Lovings and their community. The film is brimming with small, beautifully realized, evocative details. A dinner scene shows how completely Richard is accepted as a part of Mildred’s family. But we also see a frank conversation where a black man tells Richard that they may be alike, but Richard can “fix” his problem with the bigoted law by leaving Mildred while there is nothing they can do to “fix” theirs.

Richard Loving may need a lawyer to tell the nine old men on the Supreme Court he loves his wife. We see it in every frame.

There is also an excellent documentary called “The Loving Story,” with archival footage of the Lovings and of the virulent racism expressed by Virginia citizens and the court.