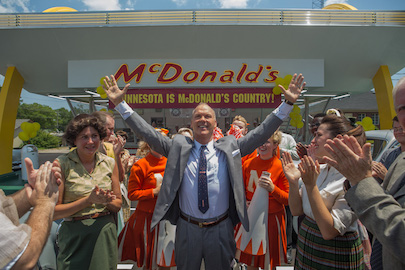 When a travelling salesman named Ray Kroc discovered a hamburger stand run by two brothers, he caught wind of a golden opportunity and so began the story of McDonalds.  It is a tale of mendacity, betrayal and corruption. A certain kind of brutal vindictiveness was a hallmark of Kroc’s business style. After stealing their name and effectively destroying the McDonald Brothers’ business, Kroc built a franchise just across the road from the original restaurant as a final point of insult. Read on…

Michael Keaton lets the Mephistophelian nature of his character run rampant, as greed, ambition and other soul corroding qualities take over. He dumps his wife, making certain that she never receives a penny of McDonalds’s stock (this after he mortgaged their house without telling her), and sets about creating the giant corporation that now squats on the American landscape like a plague.

Kroc’s brand of predatory capitalism has become emblematic of a corporate ethos that is destroying not only vast sections of the ecosystem, but perhaps even democracy itself. George Monbiot’s column in The Guardian carefully delineates the role that McDonalds has come to occupy.

Writes the inestimable Mr. Monbiot: “A wave of revulsion rolls around the world. Approval ratings for incumbent leaders are everywhere collapsing. Symbols, slogans and sensation trump facts and nuanced argument. One in six Americans now believe that military rule would be a good idea. From all this I draw the following, peculiar conclusion: no country with a McDonald’s can remain a democracy… the McDonald’s model destroys meaningful democracy. Democracy depends on reciprocal belief, trust and belonging: the conviction that you belong to the nation and the nation belongs to you. The McDonald’s model, by rooting out attachment, could not have been better designed to erase that perception.”

The genesis of what Mr. Monbiot describes as “the onslaught of the placeless, transnational capital that McDonald’s exemplifies,” is captured with oddly forced jollity in The Founder. The company began its corporate ascent with a voracious appetite for money and power. The end result is planetary waste, poverty-scale wages, spiralling obesity rates, and global climate change — it’s a veritable menu of horrors.

Pam Grady: Michael’s brilliant turn as smarmy, slimy Ray Kroc, the businessman who put McDonald’s on the map while swindling the brothers who came up with the concept and gave the fast-food empire its name, elevates The Founder to greatness in its vivid, darkly funny dissection of a soured American dream.

Anne Brodie: Michael Keaton is outstanding as the dreamer/shark The Founder is a for the Trump era in which the phrase “it’s business” excuses bad behaviour.