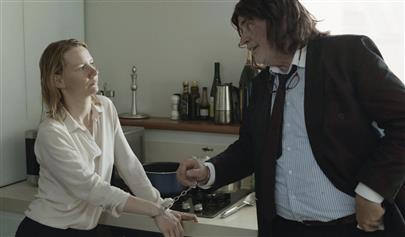 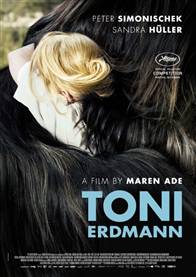 Maren Ade’s film Toni Erdmann is something no one could have predicted. A three-hour German comedy about a father and daughter reunion, set against the contemporary bleakness of corporate Bucharest. On paper, this sounds like something you would run away from, screaming at the top of your lungs. But Ade’s film is simultaneously a sly take down of Neoliberalism’s economic practices, a family drama of uncompromising nuance and complexity, and a humanistic ode to the anarchic spirit that dwells inside each of us. The film has consistently popped up on critics’ top-ten lists and packed in the awards. It is fully deserving of every accolade. Read on…

The film’s shaggy beast of a plot wanders from middle management banality to full-on slapstick, with extended sequences that add flesh and bone to the characters. Winfried Conradi (Peter Simonischek) is an aging music teacher, prone to practical jokes like fake teeth and bad wigs. His prankster ways do not appear to extend to his daughter Ines, (Sandra Hüller) a corporate shark, encased in sleek suits and glued to her phone. After the death of his beloved old dog, Winfried decides to visit Ines in Bucharest, where she is working for an oil company. This glimpse into his daughter’s life prompts the creation of the eponymous ‘Toni Erdmann’, a Loki-like trickster who upends Ines’s controlled and desiccated existence and let’s chaos and liberation flood in like a tidal surge.

Toni Erdmann is a collective social phenomena quite unlike anything I have experienced in theatres lately. At the screening of the film at the Vancouver International Film Festival, people lost their minds in the film’s final coda. A collective roar of hysteria erupted from the audience like it had been waiting forever to be set loose. Ade has tapped into something almost Jungian in its elemental power. This singular moment of catharsis, of surrender to the essential ludicrous of life, shared by 400 odd-people was a revelation.

Nell Minow: Like the serious-minded daughter in the story, the audience’s expectations are wonderfully challenged and satisfyingly upended by Toni Erdmann.

Liz Whittemore: Sandra Hüller does a beautiful job of playing a woman whose ambitions prevent her from having fulfilling intimate relationships. Her loving and hilarious father (Peter Simonischek) hounds her relentlessly with inside jokes and disguises to break though the wall she’s built around herself for too many years. Topped off by one hell of a belt session onscreen and some perfectly placed nudity for comedy’s sake, Hüller pulls off a performance that audience members might be quick to loathe, but it also digs deep into the psyche of a woman who is struggling to make her way in world dominated by men.

Jennifer Merin: Writer/director Maren Ade’s take on the unusual relationship between her lead characters — Ines (Sandra Huller) and her father (and his alter ego, both played by Peter Simonischek) — pierces the superficial and digs deep into their emotional issues. This is the relentlessly twisted tale of a daughter-father reunion that is at once horrifying and hilarious, and reveals essential psychic truths — all leading up to an unforgettable denouement. Huller and Simonischek are absolutely brilliant.

Anne Brodie: Toni Erdmann is the story of a father’s attenpts to connect with his daughter, who is veering headfirst into a nervous breakdown. The brilliance of it is that it is outrageously funny. And its a rarity – a nearly three hour comedy that whips by and engages completely; a masterful accomplishment.