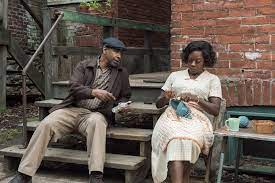 Adapting a Broadway play for the screen is always a challenge – one that Denzel Washington found daunting, particularly since August Wilson’s iconic chronicle of a dysfunctional family is a Pulitzer Prize-winning glimpse into the essential African-American experience. Set in Pittsburgh, Pennsylvania, during the 1950s, it revolves around the relationship between a bitter, Negro League baseball player-turned-sanitation worker, 53 year-old Troy Maxon (Washington), and his long-suffering wife Rose (Viola Davis)

When we first meet hyper-talkative Troy, he’s riding on the back of a garbage truck in the Hill District, complaining to Bono that only whites get to be drivers, sitting in the comfortable cab, while blacks do the heavy lifting, lugging the trash cans.

Although “Fences” opened on Broadway in the 1980s, the movie version was delayed since Wilson was steadfast in his insistence on an African-American director.

In 1987, when Eddie Murphy wanted to transition into serious roles, Paramount Pictures bought the rights for more than $1 million, then a staggering price for a theatrical property. But that never panned out, nor did other plans, particularly after August Wilson died in 2005.

Following Wilson’s poetic, still-relevant text like “a holy spirit,” as a director Denzel Washington elicits insightful, intelligent, nuanced performances from his acting ensemble but – with action primarily restricted to the yard of a two-story brick home – it’s visually claustrophobic, not cinematic enough to disguise its theatrical origins.

Which means there’s a seemingly insurmountable emotional barrier between players and viewers, while the fence epitomizes not only Troy’s deprivation of a chance in the major leagues but also his inability to empathize with his wife and son.

On the Granger Movie Gauge of 1 to 10, “Fences” is a formidable 8, featuring authentic, award-worthy performances.