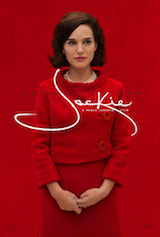 Pablo Larrain’s new film, Jackie, starring Natalie Portman in the title role, recounts the way Jacqueline Kennedy dealt with the terrible days right after the assassination of President Kennedy, and also how in retrospect she came to think about her role and that historical moment. The film adopts a low key, talking-head rhetoric about the woman, her trials and tribulations, and the ordeal the United States went through. But it ends with the (inordinately) triumphant strains of the final song from the Broadway musical Camelot, as Richard Burton sings, “Don’t let it be forgot/That once there was a spot/For one brief shining moment/ That was known as Camelot.” What are we to make of this ecstatic explosion of kitsch as the culmination of an essentially quiet film about one of the most wrenching episodes in modern American history? Read more on EYE ON MEDIA