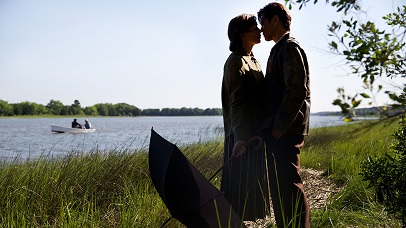 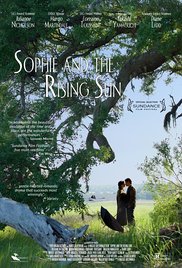 Director Maggie Greenwald’s film Sophie and the Rising Sun is distinctly old-fashioned, sturdy in its construction, stolid even, but with fine details of time and place that add depth and grain to the action. The film is a handsome affair about interracial romance and racial prejudice, and although it occasionally traffics in sentiment, the solidity and strength provided by the female cast keeps it focused on rational tolerance, womanly solidarity and a little old thing called love. Read On…

The setting is Salty Creek, South Carolina, circa 1941. WWII is raging in Europe, but in the sleepy Southern town, there is little evidence of the conflagration that is eviscerating the rest of the world. The only news the residents of Salty Creek get comes from newsreel footage of atrocities perpetrated in distant countries. Afternoon tea, church choir, and particular attention paid to manners and gentility preoccupy the townsfolk, including Anne Morrison (Margo Martindale), the local gardening doyenne. In addition to fussing with her rhododendrons, and writing a column for the paper, Anne also presides over the Missionary Ladies Society. In her spare time, she keeps an eye out for her niece Sophie (Julianne Nicholson), who has attracted the attention of the neighborhood ladies, including the relentless Ruth Jeffers (embodied with decorous evil by Diane Ladd). Over tea and sugar cookies, the women gossip and opine on Sophie’s oddities (dressing like a man, fishing for crab, and painting landscapes down by the river).

Based on Augusta Trobaugh’s novel of the same name, the film takes its gentle time introducing the particular nuances of place, the Spanish moss dripping from the trees, and the insular nature of the townsfolk. The action kicks off with the arrival of a mysterious stranger, who is dumped, beaten and bloodied, into Anne’s lap. Her maid promptly quits, refusing to care for someone of Asian descent. Grover Ohta (Takashi Yamaguchi) is initially mistaken for a Chinese immigrant, suspicious enough, but not downright threatening. But the bombing of Pearl Harbour changes everything, and gentle Ohta is again the subject of racial violence. Anne enlists the help of her new maid Salome (Lorraine Toussaint) and Sophie to hide Ohta in her father’s old fishing shack. But the town busybodies will not be stopped, and before long, Ruth has ferreted out the truth.

Greenwald’s film is a handsome affair, and although it occasionally traffics in sentiment, the solidity and strength provided by the female cast keeps things from sliding into bathos. Rational tolerance, womanly solidarity and a little old thing called love also add meaning and emotion. — Dorothy Woodend

Betsy Bozdech: This 1940s-set romantic drama about a white Southern woman who falls in love with a Japanese man just before the attack on Pearl Harbor has themes that, unfortunately, are still very relevant today. It’s impossible not to flinch at both the moments of casual racism and the more intense consequences of xenophobia. But there are also scenes of beauty and connection, as well as characters who learn, almost despite themselves, that there’s much more to a person than what you see on the outside.

Anne Brodie: Sophie and the Rising Sun is a small, intimate look at love and hate in small town Deep South, USA, 1941. A “foreigner” (Takashi Yamaguchi) arrives in a small isolated village and while he experiences hatred, he also inspires love. But when the Japanese bomb Pearl Harbour, he becomes the enemy. It’s a damning tale told with humanity and compassion. Excellent performances by all, Yamaguchi, Julianne Nicholson, Margo Martindale, Lorraine Toussaint and a deliciously wicked Diane Ladd.

Cynthia Fuchs: “I never knew your name was Salome.” Sophie (Julianne Nicholson) makes many discoveries in Maggie Greenwald’s new film, including the name of her aunt’s housekeeper. Living in small-town South Carolina as the US enters World War II, Sophie doesn’t even know how much she yearns to escape the limits of her small-minded community. She owes her introduction to horizons beyond her own both to Salome (Lorraine Toussaint), returned to work for Anne (Margo Martindale) after years on the road as a singer, and to the newcomer Grover (Takashi Yamaguchi), California-born and victim of repeated violent attacks by white locals and uniformed soldiers. That Sophie falls in love with Grover provides the movie with a basic forbidden romance plot (and a little too much slow-motion flashbacking), but Greenwald’s focus here, much like her remarkable 1993 film, The Ballad of Little Jo, is on the unexpected and resilient bonds that form among rebels and survivors, the strengths they discover in themselves when confronting fear and rage. And for that, Sophie and the Rising Sun, for all its familiar plotting and beautiful imagery, is a fable both steely and timely.

Jennifer Merin: Beautiful performances from Julianne Nicholson, Margo Martindale, Lorraine Tousaint and Diane Ladd bring to life writer-director Maggie Greenwald’s drama about the love affair between a lonely belle and her Japanese gardener. Set in the deep south during World War II, the quiet, intimate romance plumbs the hideous effects of racial prejudice and honors heroic efforts — all made by women — to make things right. The film’s release is timely, indeed.

Sheila Lynn Roberts: Writer-director Maggie Greenwald’s sensitive interracial romance unfolds against the backdrop of prejudice in rural South Carolina during WWII. Based on Augusta Trobaugh’s 2001 novel of the same name, the film features incisive yet nuanced performances by Julianne Nicholson, Margo Martindale, and Lorraine Toussaint along with stunning cinematography by DP Wolfgang Held.

Elizabeth Whittemore: Beautifully shot and gorgeously adapted from the 2001 novel by Augusta Trobaugh, director Maggie Greenwald has given us a film all too fitting for our nation’s political climate. Although set in 1941, the xenophobia and misguided generational prejudice are glaringly familiar in this interracial love story. With stunning performances by three leading ladies, Julianne Nicholson, Margo Martindale, and Lorraine Toussaint, breaking barriers and defying societal “norms” is everything we need to see right now.

Title: Sophie and the Rising Sun

Screenwriter: Maggie Greenwald, based on the novel by Augusta Trobaugh