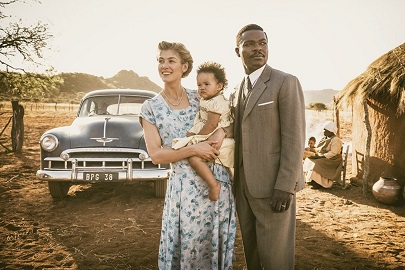 Like the marriage of Richard and Mildred Loving — so movingly portrayed in last year’s Loving — Seretse and Ruth’s union defies tradition, confounds expectations, and ultimately leads to change for the better. Though that change is certainly hard-won; viewers will be hard-pressed not to see parallels between the political machinations of mid-20th century England and modern-day partisan manipulation.

Asante’s story is rich in detail, from the lovely cinematography (especially in the Africa-set scenes) to the period costumes and hairstyles. And her stars are convincing in their roles as real-life heroes; Oyelowo, especially, burns with Khama’s passion for justice and equality. As Ruth — a model of loyalty, conviction, and courage — Pike shows her range as an actress, presenting a complete turnaround from her indelible turn as the vicious, manipulative Gone Girl.

It’s clear that Asante is working on establishing an expertise in bringing notable true stories to the big screen. She previously tackled both history and the complex issue of race in 2013’s Belle, which deftly dealt with the interplay of gender, skin color, social class, and activism. While A United Kingdom doesn’t feel quite as novel as that movie — the story, while inspiring, is rarely surprising — Asante deserves credit for introducing viewers to role models as worthy as Seretse and Ruth. Stories like theirs should never fall into the dusty pages of textbooks. — Betsy Bozdech

Sheila Roberts: Set during the late 1940s in the Bechuanaland Protectorate, “A United Kingdom” explores the love and controversial marriage between an African heir to the throne and a white British woman. Superbly helmed by Amma Asante and starring the talented David Oyelowo and Rosamund Pike, what might otherwise have been just another tale of interracial love that challenged the societal norms of an era becomes a fascinating true story framed against the evolving political landscape of what eventually becomes modern Botswana.

Dorothy Woodend: Amma Asante’s new film proceeds with attention paid to the personal costs of great change. While the political manoeuvring of nations, and the lingering effects of colonialism take up a great deal of the narrative, at its heart United Kingdom is a love story, and here it succeeds. Resolute, indomitable and gloriously ungovernable, love will have its way, no matter the impediment, be it king or country.

Anne Brodie: A United Kingdom recalls a shameful period of British colonial history not so long ago when blacks and whites in its African territories were forbidden to marry. This is the fact-based story about Prince Seretse Khama of Botswana and an English woman, Ruth Williams, whom he met in the UK, married and took home to face certain discrimination from British officials and his community. At the time South Africa was shaping its apartheid system and did not take kindly to their union. David Oyelowo and Rosamund Pike star.

Nell Minow: As she did with Belle, director Amma Asante shows us a real-life story of love, courage, and integrity triumphing over bigotry and corruption.

Leba Hertz: An interesting movie about a part of history little known in the U.S.