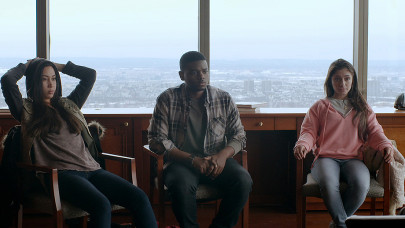 From Nowhere has the peculiar timing of being released in theatres in the midst of the current maelstrom around immigration in the US. The film premiered last year at the SXSW Festival, where it picked up an audience choice award. Back in those innocent and unsuspecting days of yore, the film was relevant and topical, but now it is essential. As the US president threatens to muster the National Guard to round up  the undocumented, From Nowhere offers up a portrait of three young lives caught up in this Kafkaesque situation. Read On…. Director Matthew Newton and co-writer Kate Ballen (the film takes its inspiration from Ballen’s play) infuse the drama with everyday details that ground the story. This naturalistic, almost quasi-documentary quality has the effect of making the story that much more impactful.

Moussa (J. Mallory McCree), born in Guinea, is a solid kid, a hardworking student and a source of support for his family (mother, sister and baby brother). Peruvian-born Alyssa (Raquel Castro) is graduating with top marks as the valedictorian of her class. Sophie (Octavia Chavez-Richmond) is the dark soul in this trio. Originally from the Dominican Republic, she has been passed between family members, with no one to genuinely care for her. Even more troubling aspects of sexual abuse and neglect are also a part of her young life. With the help of an earnest teacher (Julianne Nicholson) and an immigration lawyer (Denis O’Hare), the kids are charged with making their case to the system in order to get their papers. As their lawyer makes clear the grimmer the details of their stories, the better. In his laundry list of horrors, “Genocide is good. Genital mutilation is better. Dictators are the best.” But the indignity and fear these kids suffer, while smaller in scale, is just as dehumanizing, as a scene with two cops rousting Moussa over a fake ID makes explicit.

The American dream become nightmare may be the underlying message, but it is the undeniable humanity of these characters — resolute, brave and struggling for a better life — that most endures. — Dorothy Woodend

Susan Wloszczyna: Few films are more of the moment than From Nowhere, as it encapsulates the rising fears of undocumented U.S. residents in the form of three very different Bronx high schoolers as uncertain legal circumstances stand in the way of their achieving their hopes for a better future. Julianne Nicholson and Denis O’Hare shine as the teacher and immigration lawyer who offer hope to these students. But it is the trio of young actors – J. Mallory McCree as a brainy African Muslim, Octavia Chavez-Richmond as a surly native of the Dominican Republic and Raquel Castro as an all-American-girlish over-achiever from Peru – who stand out as they provide much-needed human faces for a pressing issue that is currently consuming the headlines

Betsy Bozdech: This very realistic, very sobering drama doesn’t offer any easy answers — rather, it effectively captures how difficult and complicated it is to be an undocumented teenager in the United States. The young actors’ performances are natural and believable (it brings 2001’s excellent Our Song to mind in that regard), and the challenges they face are heartbreaking. This is the kind of movie designed to open eyes and minds and inspire empathy and compassion, and although it isn’t perfect, it succeeds in that mission.

Anne Brodie: Matthew Newton’s From Nowhere takes a hard look at the immigration in the US as three undocumented Bronx teens apply for citizenship papers. They live half lives in fear of discovery and exile to the dangerous places of origin they barely remember. The common hope of waiting for the laws to change in their favour no longer seems to apply IRL. These complex stories are told with eloquent simplicity to stunning effect.

Liz Whittemore: At a time in our country when undocumented immigrants are being dehumanized by an administration that has become more dysfunctional than anything we’ve ever seen in our history, From Nowhere gives us faces to focus on, people to care about, stories to root for. It’s a timely film and one that needs to be viewed by a wide audience in this era of chaos. From Nowhere’s screenwriters, Matthew Newton and Kate Ballen did their homework on the immigration process. Taking a realistic look at the difficulties that can tear families apart. Read full review.

Jennifer Merin: An ever so timely tale of three bright and talented high school students who find themselves shut out of the American dream because they are undocumented. Superb performances by Julianne Nicholson and Denis O’Hare as a teacher and immigration lawyer who are trying to help them, and by the three teens — J. Mallory McCree, Octavia Chavez-Richmond and Raquel Castro — make the film a compelling and heart-gripping must see.

Nell Minow: “From Nowhere” draws its power from a deep respect for its subjects and a recognition that justice for undocumented immigrants begins with this kind of “documentation” — telling their stories.

Leba Hertz: In this film about three illegal high school immigrants, the stories are timely, and Julianne Nicholson and Dennis O’Hare give riveting performances and are the driving forces behind the story.

Cynthia Fuchs: “I will get a job and I will wait it out until the laws change.” Moussa (J. Mallory McCree) is hardly confident when he tells his sister his plan. An undocumented high school student living in the Bronx, Moussa, born in Guinea, bears multiple burdens. At once afraid of being found out and hopeful that the laws will change, he stands in for immigrants facing a threat expanded exponentially since Donald Trump’s election, as the laws change for the worse. In Matthew Newton’s melodrama, Moussa’s story is set alongside those of two other undocumented classmates. Sophie (Octavia Chavez-Richmond) has been living with a series of neglectful and abusive relatives since her arrival as a child from the DR, and Alyssa (Raquel Castro), living with her sister and looking forward to prom and delivering her speech as valedictorian. Doing her best to look out for all three is their earnest Shakespeare teacher Jackie (Julianne Nicholson): she’s sent them to a lawyer, Isaac (Denis O’Hare), who says their best chance is to detail the dangers they face where they come from, especially “genocide, genital mutilation, and dictators.” If the urgency of such stories is clear, the film tilts between scenes of schematic simplicity and understated intimacy. When Jackie meets with Isaac or with Moussa’s mother, Maryam (Chinasa Ogbuagu), or when Sophie stands across the room from her obnoxious male relatives, close shots of their faces or even their backs present layers of nuanced backstory without need of overt exposition. Trusting viewers to understand consequences and imagine possibilities, such moments underline the difficult balance between fear and hope that defines Moussa’s very existence.