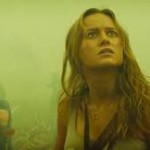 Kong: Skull Island emerged as box office king, debuting at No. 1 with a $61 million take. The latest cinematic outing for the “eighth wonder of the world” topped international charts, too, earning $81.6 million from 66 territories. Since this version of Kong is here to stay for a while, it’s a good thing the director and screenwriters Dan Gilroy (Nightcrawler), Max Borenstein (Godzilla) and Derek Connolly (Jurassic World) gave the female lead (Brie Larson) an overhaul nearly as dramatic as the supersizing of the gigantic gorilla. She’s a seasoned and fearless “anti-war photographer” who doesn’t tote a gun, but gets her team out of harrowing encounters with the Skull Island’s myriad monsters. She’s first to empathize with Kong and realize he’s not the mindless killing machine soldiers and scientists believe him to be. Read more on THE WEEK IN WOMEN