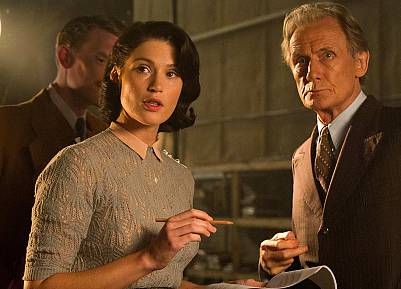 Mix a few dashes of “Argo,” a smidge of “Monuments Men” (admittedly, there’s not all that much worth taking), and a hearty dollop of “Hope and Glory,” and you’ll start to get an idea of what to expect from “Their Finest.” This World War II-set romantic dramedy follows a scrappy group of British filmmakers/propagandists who find themselves scrambling to make a morale-boosting movie based on an inspiring true story … sort of. 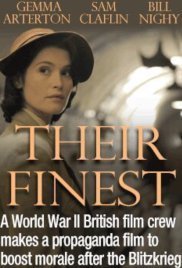 Gemma Arterton stars as Catrin Cole, an underappreciated radio writer who gets her big break on the film after she embellishes the facts of a Dunkirk rescue-gone-awry to her bosses. Desperate for a feel-good flick, they don’t seem too bothered about fact checking, and production gets fast-tracked. All the while, Catrin is struggling to maintain her relationship with angsty painter Ellis (Jack Huston) while fighting a growing attraction to cynical co-screenwriter Tom Buckley (Sam Claflin).

“Their Finest” is small-scale, as WWII movies go, but that gives you time to appreciate its characters (including Bill Nighy as a demanding aging actor with hidden softness) and the moments it captures related to the everyday horrors of war — the inconvenience/tragedy of crew members not showing up on set because they were killed in the Blitz, for example. And Gaby Chiappe’s script, based on Lissa Evans’ novel, is both an homage to and a gentle satire of the art and compromise of showbiz. The story of Catrin’s fight to really be heard and make her mark very much resonates today — it would be easy to dismiss her “slop” job early on as a relic of the past, but how much have things really changed?– Betsy Bozdech:

Susan Wloszczyna: With Their Finest, Danish director Lone Scherfig has finally delivered a worthy femme-forward follow-up to her 2009 Oscar-nominated An Education with another portrait of a London-based young woman adapting to an era of social upheaval. But instead of a British schoolgirl in the ‘60s, Catrin Cole (a glowingly rosy-cheeked Gemma Arterton) is a displaced Welsh lass looking for a way to pay the rent during the Blitz, when most men were otherwise preoccupied by war. Her wordsmith skills land her a job writing scripts for propaganda films that aim to lift morale and instill pride While initially tasked with inventing women’s dialogue – dubbed “the slop” – she is soon recruited to take the lead on penning a civilian rescue-mission adventure featuring patriotic twin sisters as heroes. Sparks fly between her and a cynical fellow writer Tom (Sam Claflin, duly intellectualized with specs and a ‘stache), although I wished that Arterton – who knows how to pretty-cry as well as anyone — would have instilled her character with some Jean Arthur-ish snap and crackle. But a terrific supporting cast – especially the always-invaluable Bill Nighy, who easily slips into his part as a hammy and haughty aging actor – picks up any slack.

Nell Minow: “The slop” was the term male WWII-era British propagandists used to describe the dialog written for women characters in the “authentic but optimistic” films produced to boost wartime morale. The women who helped bring those stories to life are well served in this touching portrayal of their contributions.

Anne Brodie: As German bombs strafed London during the Blitzkrieg a handful of courageous government filmmakers held their positions and made a movie. Lone Scherfig’s tribute to those who waged a war on fear through entertainment balances comedy and drama for some bracing good fun. These too were heroes. Gemma Arterton and Sam Claflin star but their star Bill Nighy steals the movie.

Thelma Adams: Following “An Educaation,” Danish director Lone Scherfig brings a warm-hearted wise girl-power period drama, demonstrating that when female directors get behind the camera they can bring the stories of women AND men to a public hungry for intelligent and entertaining fare.

Liz Whittemore: With a script that is funny, charming, smart, and eye-opening, Their Finest is a beautiful gem of a film. Filled to the brim with some of Britain’s most famous names and faces, the story is ripe with gender politics and the heaviness of the time period’s reality. Quippy dialogue and a whole lot of heart create a lasting effect on the audience. Their Finest has something for everyone.

Jennifer Merin: Their Finest is a delightful British World War II dramady about a young woman who is hired to write patriotic screenplays that will boost the spirits of Brits as they stiff upper lip-it in the midst of air raids and shortages. Director Lone Scherfig does a splendid job of making that movie-within-a-movie meme magical, the performances are superb (especially Bill Nighy as an aging thespian) and the satirical reveal about propaganda plays particularly well today. The story and script are original and rich and thoroughly engaging. And the plight of a woman writer is still quite relevant in the present tense.

Cynthia Fuchs: “We mean to cultivate a more convincing female angle in our output.” So declares Mr. Swain (Richard E. Grant), head of the Ministry of Information’s Film Division. At that very moment in Their Finest, he’s standing over the female he has in mind, Catrin (Gemma Arterton), clamping his hands onto her shoulders so everyone in the room is sure who’s cultivating what. It’s World War II London, and Cartin’s in search of a creative outlet as well as a way to support herself and her artist husband, which means she’s going to take this job, helping to write a script for a film that, in Swain’s words, will “capture the public imagination and trust.” Cue the typing montage, a device that shows up more than once in Lone Scherfig’s melodrama. Like all typing montages, it features a camera panning over people tapping on keyboards and music that indicates industry and dedication, here leading to some images of the film that Catrin and her fellow writer and obvious romantic interest, Tom (Sam Claflin), will eventually conjure. When this film doesn’t quite capture your “imagination and trust,” it’s because you’re too familiar with the clichés it’s simultaneously exploiting and exposing. While the film within the film sets out heroic men and damsels in distress (at least briefly) in order to appeal to audiences, Their Finest doesn’t quite get out from under its own predictable plot turns.

Leba Hertz: Bill Nighy and Gemma Atherton are delightful in his World War II British comedy. And, people, if you don’t know who John Clements was. look him up!