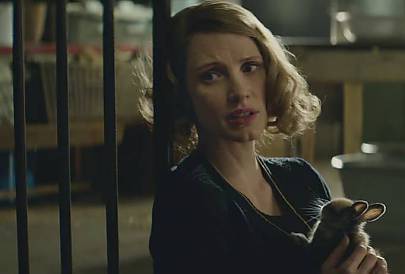 The Zookeeper’s Wife is a powerful, emotional ​fact-based ​drama about both the depth of human suffering experienced during World War II and the remarkable courage and strength of character that ordinary women and men demonstrated when their friends’ and neighbors’ lives were in danger. Jessica Chastain stars as Antonina Zabinska, a warm, gentle wife, mother, and animal lover who helps her husband, Jan (Johan Heldenbergh), run the Warsaw Zoo in late-1930s Poland. Read on… 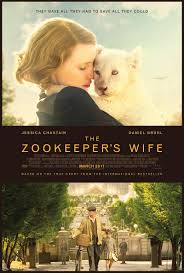 Life is idyllic until the Nazis bomb the city and invade, ultimately forcing all of Warsaw’s Jewish residents into the overcrowded, miserable, dangerous ghetto. Despite the danger to themselves and ​to ​their young son, Antonina convinces Jan to hide their Jewish friend in a small storage room. And soon the Zabinskis are working with the local resistance to smuggle many more Jews out of the ghetto and into hiding, masking their ​mission by working with eminent Nazi zoologist Lutz Heck (Daniel Bruhl) on an ambitious animal-breeding program.

Chastain is superb as the title character, simultaneously vulnerable and strong, a woman who cares passionately about any creature who needs protection. Her Antonina is frequently terrified but determined to do what she ​must to survive and to ​safeguard those whom she’s protecting, even if that means stringing Heck along. A speech in which Antonina explains her love of animals (unlike humans, they can’t betray you) to a horribly wounded young girl is heartbreakingly convincing; Antonina’s life hasn’t been easy, and she had to overcome a lot of pain to find the happiness she’s now so scared of losing.

Credit for that ​affecting speech — and the rest of the script — goes to ​writer​ Angela Workman, ​who adapted Diane Ackerman’s same-named book for ​the screen. ​Director Niki Caro (Whale Rider, McFarland, USA), convincingly recreates the ​atmosphere of fear and disruptive chaos in WWII Warsaw. The costumes and production design are lovely; the zoo starts out as a Garden of Eden-like slice of urban paradise, and our memory of it that way helps us understand why the Zabinskis fight so hard for it, even after it’s left broken and bleak. No matter what it looks like, it’s still a sanctuary, a place where Antonina can nurse scared, hurting animals — human and otherwise — back to health. — Betsy Bozdech:

Susan Wloszczyna: Jessica Chastain continues to flex her Streep-like prowess with accents – this time, an Eastern-European purr –as Antonina Zabinska, a real-life Russian-born Pole who oversaw the Warsaw Zoo with her husband, Jan (Johan Heldenbergh of The Broken Circle Breakdown). During World War II, the couple would transform it into a secret sanctuary for 300 Jews, most of whom were able to flee to safety. It is gratifying to see a woman portrayed as a Holocaust hero in the vein of Oskar Schindler. But Chastain also serves as a kind of female Dr. Dolittle, tending to ailing newborn elephants and nurturing adorable lion cubs while later employing the same skill set to comfort a traumatized girl sexually abused by Nazi soldiers. Director Niki Caro (Whale Rider, North Country) does better with the initial “aw”-inducing moments of cute animal antics (got to love the speedy camel who never stops running around the grounds) than she does with the depictions of persecuted humans, too often turning what should be harrowing into melodramatic predictability. But in Chastain she trusts, and rightfully so, as her stunning star is what keeps The Zookeeper’s Wife from being too tame of a tale.

Thelma Adams: Niki Caro’s The Zookeeper’s Wife is a big, generous portrait of a heroic woman who risked everything to hide Jews from the Nazi’s in Poland with Jessica Chastain giving the character depth, decency and delicacy.

Nell Minow: The Zookeeper’s Wife reminds us the smallest acts of courage and kindness can bring humanity to the most inhuman circumstances. Jessica Chastain glows as a woman whose love for all living creatures who are hurt or frightened inspires her to take great risks and help those in need. Read Niki Caro interview. Read Diane Ackerman interview.

Anne Brodie: The Zookeeper’s Wife goes far deeper in to the realties of the Nazi occupation of Warsaw than the trailers suggest. This fact-based drama is more than a feel good story about a woman sheltering Jews in the city’s bombed out zoo at great personal risk . It goes to the heart of war, betrayal, political greed and the madness of the Third Reich. The slaughter of the zoo animals telegraphs what was to come for Jews in Warsaw and we’re not spared the atrocities. There is heroism in the unsuccessful Warsaw Ghetto Uprising and in the zookeepers’ humane efforts . Jessica Chastain championed the story as its star and executive producer and for the most part, avoids pat answers and sentiment.

Jeanne Wolf: The Zookeeper’s Wife hits you in the heart. Jessica Chastain leads the wsy in s true story of how a woman’s coursge, love and compassion triumphed over the horrors of war.

Sheila Roberts: The Zookeeper’s Wife is a compelling WWII tale of heroism and survival based on the real-life story of Warsaw zookeepers-turned-resistance-fighters Jan and Antonina Zabinski who risked their lives to smuggle Jews out of the Ghetto following Germany’s invasion of Poland. Skillfully directed by Niki Caro from a screenplay by Angela Workman adapted from Diane Ackerman’s award-winning non-fiction book, the film features a superb performance by Jessica Chastain with strong support from Johan Heldenbergh and Daniel Bruhl. Caro’s striking opening sequence sets the tone for the entire film as it captures vividly the unique connection between humans and animals that thrives before the Nazis arrive and persists even after the menagerie is turned into a desolate battlefield. The film boasts high production values, from stunning cinematography by Andrij Parekh, to impressive production design by Suzie Davies, set decoration by Charlotte Watts, costume design by Bina Daigeler, and a moving score by Harry Gregson-Williams. “The Zookeeper’s Wife” is noteworthy for commemorating a woman’s place in history and for the significant number of women that worked creatively above and below the line on it.

Cate Marquis: THE ZOOKEEPER’S WIFE is not only an inspirational true story told through a lush historical film but a women’s cinema trifecta: A female star in the lead role, a woman director and a woman author. The director is Niki Caro, who rose to fame with WHALE RIDER, another film with a determined female central character, and the film is adapted from Diane Ackerman’s book of the same name. The star is Jessica Chastain, who plays Antonina Zabinska, a little-known hero during the Holocaust, who ran the Warsaw zoo alongside her husband Jan in pre-World War II Poland. When the Nazis invade their country, Antonina and her husband sheltered hundreds of Jewish men, women and children in their home on the zoo grounds, and therefore saved their lives. Read full review.

Jennifer Merin: Niki Caro’s very compelling World War II drama stars Jessica Chastain as a Polish woman who saved hundreds of Jews from Nazi extermination by hiding them in the Warsaw zoo she maintained with her husband. Angela Workman’s screenplay, adapted from Diane Ackerman’s eponymous truth-based novel, presents a female protagonist who is sensitive, courageous, smart and effective — a gentle mother, animal lover and heroine. Thefilm passes the Bechtel test with tremendous aplomb. And I say brava to Chastain, Caro, Workman and, above all, Antonina Zabinska.