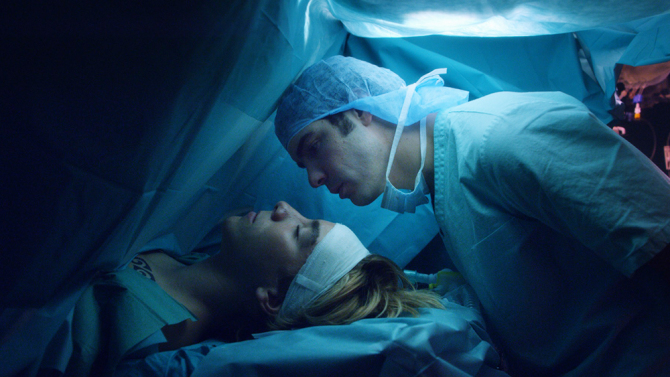 Melancholy and moving, Heal the Living is a quiet, affecting French drama about organ donation. It weaves multiple characters’ stories together as it explores both the heartbreaking loss and the heady promise of renewed life.

As the film begins, young, sun-kissed Simon (Gabin Verdet) enjoys an early morning surfing expedition with his friends; on their way home, a car accident strikes like a rogue wave, leaving the teenager brain-dead and on life support. His grief-wracked parents (Emmanuelle Seigner and Kool Shen) are asked to decide, quickly, whether their son would want his viable organs donated — 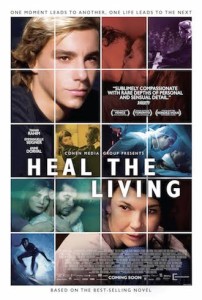 organs that could help people like Claire (Anne Dorval), a mother to two adult sons whose own heart is rapidly failing her. Intimately involved on both sides of the equation are the nurses and doctors who must be ready to act at a moment’s notice.

Director Katell Quillevere also wrote the film’s screenplay (based on Maylis De Karangal’s novel Mend the Living); a keen understanding of human nature shines through in both her dialogue and direction. There are no big set pieces or showy speeches here, just heartfelt moments and real reactions to the surprises that life inevitably brings.

The performances are as realistic and relatable as the writing. Seigner and Dorval are certainly stand-outs, but the whole ensemble is strong. Emotions run high in this film, and the actors are up to the challenge: Grief sparks fierce anger; fear nearly gets in the way of hope and love. In the end, while there’s no Hollywood-perfect resolution, life does go on. As it always does.– Betsy Bozdech:

Anne Brodie: Katell Quillévéré’s exquisite Heal the Living is a powerful mediation on life and death, an emotional wallop and wakeup call to the reality that everything can change in a second. Much happens over the course of a couple of days as a 17 year old surfer (Galatéa Bellugi) lies brain dead following a car accident. His gutted parents (Emmanuelle Seigner and Tahar Rahim) struggle to understand why he has to go as a single mother (Anne Dorval) looks forward to new life with the boy’s heart. This is a painfully real and stirring film made with jewel like precision that slices through our walls to the truth. Heal the Living’s classic, formal filmmaking that presents the quandary of one life for another and the ripple effects of our actions but favours neither side. David Bowie’s Five Years has new meaning as it plays over the closing credits.

Cate Marquis: In part, HEAL THE LIVING is a medical procedural, like on ER or countless television dramas, but what sets it apart is its fuller emotional portrait of the patients and their families, and its lush cinematic approach to the subject. That cinematic quality is less in the foreground in the surgical scenes, which are handled with taste and a minimum of blood, but comes to the fore in depicted the rich inner lives of the people involved. Read the full review.

Jennifer Merin: Katell Quillévéré’s compelling and poignant character-driven life and death drama is about the immediacy of organ transplant and its emotional impact on all who are brought together by the random circumstances leading up to and following it. Emmanuelle Seigner and Tahar Rahim lead a marvelous ensemble of actors who deliver exquisitely sensitive performances.

Cynthia Fuchs: Katell Quillévéré’s Heal the Living opens with the sound of breathing. Seventeen-year-old Simon (Gabin Verdet) wakes to see his girlfriend sleeping beside him, as their breathing together creates a soothing, essential rhythm. It’s before dawn, and Simon is soon out of bed and on his way to the beach, where he and his friends will surf: as he rides his bicycle, the camera hovers and follows him, creating another rhythm, swift and lovely, when Simon’s friend — riding a skateboard — comes up beside him on the street. Together, they make their way to a van driven by a third friend, and they’re off, to the deep blue, early morning waves. Read the full review