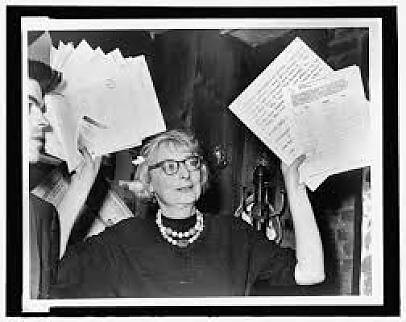 The street fight between Robert Moses and Jane Jacobs is the subject of Director Matt Tyrnauer’s new film Citizen Jane: Battle for the City. The film, which premiered at the Toronto Film Festival, and opened the DOC NYC Festival, is now entering theatres across the country. Despite the fact that the majority of the action took place more than 50 years ago, it could not be more timely. Continue reading… 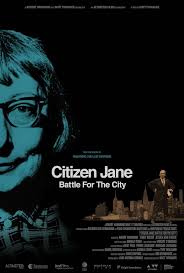 In 1955, Robert Moses had amassed near-supreme power in New York City, installing bridges, tunnels and public housing on a mass scale. But his plan to bisect Washington Square Park with a four-lane roadway was met with unexpected opposition the form of one Jane Jacobs: mother, journalist, and unlikely activist, who roused her neighbourhood of Greenwich Village, and set about stopping Moses dead in his tracks.

The story has inspired essays, articles, and even an opera, but the pair only met once in real life. Jacobs described the moment in an interview with James Howard Kunstler: “He was there briefly to speak his piece. But nobody was told that at the time. None of us had spoken yet because they always had the officials speak first and then they would go away and they wouldn’t listen to the people. Anyway, he stood up there gripping the railing, and he was furious at the effrontery of this, and I guess he could already see that his plan was in danger. Because he was saying: ‘There is nobody against this – NOBODY, NOBODY, NOBODY but a bunch of … a bunch of MOTHERS!’ And then he stomped out.”

Tyrnauer captures the larger ideas, detailing not only the history and ideology that fuelled the high modernism of the 1950s and 60s, but also uncovering the archetypal clash embodied in the film’s two main combatants. In essence: male versus female, top down against bottom up, and, most fundamentally, destroyer versus creator. Where Moses saw festering rot and urban chaos described as a cancer that needed be surgically removed, Jacobs saw diversity and density, life thronged with messy and competing voices, alive, pulsing, and complex.

After his initial roadway project was defeated, Moses circled back around, designating large swathes of Greenwich Village as “blighted”, a slum that required extensive redevelopment. Again, Jacobs sprang into action, organizing protests, rallies, and even getting arrested.

Jacobs went on to publish her seminal book The Death and Life of Great American Cities, becoming herself a lodestone of influence for generations of urban planners. But the fight that Jacobs started is far from over. When asked after the film’s premiere at the Toronto Film Festival, what he hoped the takeaway would be, the director stated: “Jacobs was fearless in speaking truth to power, the model of a citizen soldier. Her story resonates today, as we are faced with a president — an international developer, no less, of luxury towers — who throws around the terms ‘urban renewal’ and ‘American carnage.’ The film can be seen as a playbook for people who want to defend vulnerable minority communities everywhere. Certainly in this country, but also in the developing world, entrepreneurs and governments collude routinely to uproot low-income sections of cities in favor of towers for the rich. That is in large part what Jacobs was writing about, and it’s happening all over again, on a much bigger scale.”– — Dorothy Woodend

Anne Brodie: Matt Tyrnauer’s galvanizing documentary Citizen Jane: Battle for the City describes how a writer turned activist helped turn the tide and saved our cities. Jacobs knew a city’s value is in the well being of its citizens and the places they frequented – sidewalks, parks, neighbourhoods – made life safe and pleasant. Le Corbusier’s idea of stark modernism, which meant wiping the “old” to make way for the new – soulless superblock residential towers, expressways through the heart of the city and its communities, she felt was an insidious lie. This wave nearly did sweep North America fifty years ago but heroine Jane’s movement grew and as a result, some plans were abandoned, some blocks were torn down and the movement to build was tamed for a time. They didn’t work, they created slums, danger, and criminality. Jacobs arguments helped saved New York and Toronto from greedy city planners at the time when the environmental and feminist movements were taking off, a trifecta of win-win. China is now in the throes of Le Corbu modernisation, building city after city of dense superblocks that will according to Jacobs result in a long-term threat to well-being. Archival footage of Jacobs being a warrior, speaking out, reasoning and marching stirs the pulse. Her eagerness to go into battle was our good fortune. Good thing she can’t see the condo superblocks today.

Betsy Bozdech: Watching “Citizen Jane,” it’s impossible not to wish that Jane Jacobs was still with us, continuing to put her grit and determination to use organizing the kind of passionate protests that helped her fight for the heart and soul of America’s urban landscape. Deftly mixing historical footage with insightful interviews, Matt Tyrnauer’s documentary manages to make the topic of city planning engaging and relevant, all while introducing us to a woman who deserves a statue in one of the parks she worked so hard to save.

Jennifer Merin: At a time when cinemaphiles and the world at large are clamoring for positive female images and strong women as role models on the screen, Matt Tyrnauer’s Citizen Jane: Battle for the City introduces us to Jane Jacobs, the author and activist whose social and political engagement preserved NYC neighborhoods for the people who live in them. Jane Jacobs is a superb role model, and director Matt Tyrnauer’s remarkable biodoc is a blueprint of how one woman can make an enduring difference. This inspiring film is a must-see.