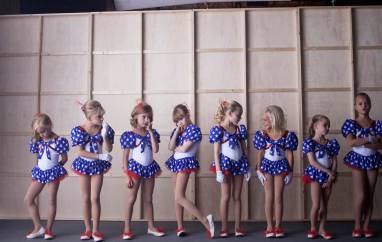 At first glance, Kitty Green’s documentary Casting JonBenét seems a rather high concept conceit — a recreation of the infamous child murder that riveted the US, and was the grist for countless tabloid stories, films, books, as well as a few lawsuits. What could possibly be left to say, one might well ask? Continue reading… 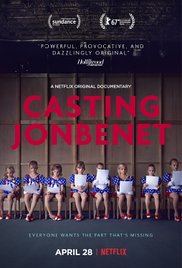 Green’s film functions almost as a Greek chorus writ large. The ordinary men, women, and children who are auditioning to play the Ramsey family offer up their thoughts and opinions about the case, as well as indulging in more than a little thespian self-dramatizing and narcissistic analysis. One man draws a connection between his recent prostate cancer diagnosis and the ovarian cancer that killed Patsy Ramsey.

The process of the actors discovering their character’s motivation is used as a means to reenter the details of the case, and the people involved. Ideas and theories are offered up in contradictory fashion, one semi-informed idea, or half-baked notion scored over another, until they form a palimpsest of judgment, blame and, occasionally, even exoneration.

What really happened and who is really guilty is almost irrelevant at some point.

Except that it isn’t. At the heart of this, and all the other films and stories about JonBenét, there is a still a murdered child, a little girl apparently abused and exploited both during her life and after her death.

So, what is the point of the documentary, exactly?

Green’s film, while not as directly exploitative as other earlier works, (JonBenét: An American Murder Mystery, or Who Killed JonBenét?) still packs a moral queasiness to it that feels corrosive.

Young boys, auditioning for the role of Burke Ramsay, JonBenét’s brother, are filmed bludgeoning a watermelon with a heavy flashlight in a recreation of the skull fracture that helped kill JonBenét. The film plays it for laughs, with one kid smiling and popping a piece of smashed melon into his mouth. ​This is not the responsibility of the ​auditioning ​boys (who are respectively 9 and 10 years old) but the filmmaker, who is ostensibly restaging the brutal murder of sister by brother​. This is sheer provocation.

Here is where, as a human person, you have to draw a firm line and say, no.

Coming on the heels of other films that have similarly employed reenactments of shocking acts (Robert Greene’s Kate Plays Christine, and Joshua Oppenheimer’s The Act of Killing) the moral ground of nonfiction has been trampled almost into sludge. But no matter this film’s intent — be it social provocation, art piece, satire, investigation of the actor’s process, or worse, a game that plays with the set pieces of abuse and murder – the blunt and horrific facts of the story remain.

The filmmaker’s intention is not quite clear. If the film is meant as an indictment of the exploitation of little girls like JonBenét, it ​sometimes ​traffics in the same methodology, and in so doing ​it risks ​undermi​ning the very critique it is attempting to make. — Dorothy Woodend

Anne Brodie: Casting JonBenet is a fresh and new documentary form that allows interviewees to hang themselves with their own rope. Dozens of actors are being cast to star in what amounts to a living art installation concerning the night JonBenet Ramsay was murdered, bringing together all the personalities, theories and potential motives wrapped up in the brutal event of Christmas 1996. The dozen or more actors auditioning for parts in the “installation” tell the filmmakers why they want the roles and to be part of it. The results are pretty grim. They tell deep, dark stories about their own experiences with crime, perversion, sexual violence and sudden death, while sharing their common obsession with the case. Those who want to play the Ramsey family members, local pervs, Sana Clauses, police and operators and other random individuals, confess to visceral connection to JonBenet’s murder, a constant loop of confession and emotion. Weird, weirder and weirder. Not to mention the ongoing public fascination with JonBenet, the pretty, doomed, little made up beauty acting out male fantasies and sexualised by her parents and the media.

Betsy Bozdech: Kitty Green’s atmospheric documentary offers a new angle on an infamous crime. By interviewing locals about their opinions on the Ramsey family and the circumstances surrounding JonBenet’s death, Green exposes how profoundly personal we can make the sensational. Setting up the interviews as auditions brings an additional layer of insight and observation to the proceedings, as well as bringing a dash of “Waiting for Guffman” pathos to the whole endeavor.

Sheila Roberts: Kitty Green’s fascinating documentary, “Casting JonBenet,” boldly reexamines the unsolved 1996 murder of 6-year-old JonBenet Ramsay through the eyes and performances of amateur actors who are part of the Colorado community in which the Ramsay family lived. While auditioning to play characters that are central to the story, each prospective actor lends his or her unique perspective, insights, and recollections of the events surrounding the sensational crime. Opinions and theories are distilled from the local and national news of that era and refined through the actors’ own emotions and personal tragedies. All reach surprisingly different conclusions about the case which in turn influence their approach to the audition. Despite the obsessive media coverage and wild speculation over the years, the heartbreaking takeaway from Green’s compelling non-fiction film is that this 20-year-old mystery may never be solved to anyone’s satisfaction.

Pam Grady: Eerie examination of the notorious and unsolved 1996 murder of child beauty queen JonBenet Ramsey treads a fine line between documentary and exploitation, most often falling on the side of the latter. Its central conceit of actors, all from the region where the Ramsey family lived, auditioning for roles in a film about the case turns into a kind of Rashomon as each actor recalls the crime and theorizes about the killer. It is original and artfully done, but one can’t help but think this is tarted-up tabloid fodder made by someone riveted by the gossip swirling about the case but with precious little interest in the actual truth behind it.

Jennifer Merin: In her compelling documentary about the unsolved murder of child beauty pageant queen JonBenet Ramsey, filmmaker Kitty Green uses an unusual point of departure to probe the psyches of the key players in the case. Green interviews potential cast members — professional actors and others who knew the Ramseys or were familiar with the pageant world — for a narrative version of the JonBenet story, and these cast hopefuls, who’re attempting to channel their characters — give their interpretations about what happened. The interviews result in what is not only a fascinating range of opinions, but a very provocative reflection about the ways in which media shapes our thoughts about events, and the conclusions we draw from our media-based observations. Read full review.