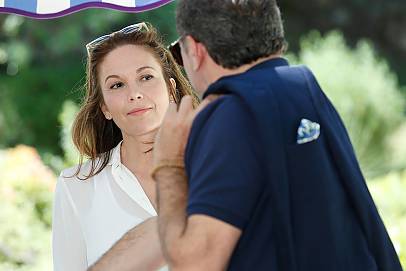 If you’re looking for an escape from the stress of everyday life (especially these days) — and who isn’t? — you could do far worse than joining star Diane Lane and director Eleanor Coppola for a food-, wine-, and scenery-filled road trip through France in “Paris Can Wait.” Reminiscent of both “A Good Year” and Lane’s own “Under the Tuscan Sun,” this is the kind of sun-kissed cinematic respite that we all need sometimes. Continue reading… It’s also the story of a woman coming to terms with parts of her life that aren’t really working anymore — particularly her marriage. Lane plays Anne, the often-taken-for-granted wife of workaholic movie producer Michael (Alec Baldwin). The couple is in the South of France while Michael oversees his latest project, but there’s not really time for them to enjoy their beautiful European surroundings (or each other). When an earache leaves Anne grounded while Michael flies ahead to Paris, Michael’s French colleague, Jacques (Arnaud Viard), offers to drive her to the City of Light. She accepts, thinking they’ll be there in a few hours, but Jacques has other plans. He treats Anne to a feast — of food, drink, attention, and conversation — during what turns out to be a meandering but life-affirming journey.

“Paris Can Wait” is Coppola’s feature directorial debut, and the movie’s earthy subject matter, glowing cinematography, Instagram-worthy food presentation, and languid pace clearly reflect the Northern California wine country lifestyle that she and her husband, Francis Ford Coppola, have long enjoyed. (You could probably make the same movie stateside and call it “San Francisco Can Wait.”) And the cinematography isn’t the only thing that glows — Lane is lovely, grounded, and relatable as a woman searching for a new sense of herself now that her teenage daughter is off at college and her relationship with her husband isn’t as fulfilling as it should be.

Ah, that we all had the time and money (and someone like Jacques!) to find ourselves in a way as gratifying and gorgeous as Anne’s journey toward agency. But in lieu of a true French escape, we can live vicariously through Anne’s experiences, make a reservation at the nearest slow-food restaurant, and pour a glass of Bordeaux while we forget about our cares for 90 minutes. Salut! — Betsy Bozdech

Anne Brodie: Diane Lane has come along with her husband Alec Baldwin on a business trip and feels like a third wheel to his phone. He hands her over to a man (Arnaud Viard) to drive her from the South of France to Paris while he jets off to Budapest. She’s not particularly concerned. The man takes her to the best restaurants, on picnics and nature walks and treats her with attention and appreciation. Their hands touch. He talks liberties with their travel plans and gets too close. Is he inappropriate or is she being wooed by his French gallantry? and chocolate? It’s a lighthearted and sunny adventure that becomes a watershed moment as she wonders if her “regular” life has become empty and stultified. Lane’s magnetic and smart, perfectly in charge of herself and transformed by a simple adventure. And chocolate.

Pam Grady: Diane Lane is luminous as a movie producer’s (Alec Baldwin) wife who finds herself the object of a flirtatious Frenchman’s (Arnaud Viard) full-court charm offensive during a drive from Cannes to Paris in Eleanor Coppola’s helium-light, captivating narrative directorial debut that is part rom-com, part travelogue celebrating the glories of rural France.

Nell Minow: Diane Lane is exquisitely luminous as a neglected wife who discovers the pleasures of the French countryside on this luscious journey of sensual and spiritual renewal. It reminds us of the deep satisfaction of taking time to appreciate beauty and to be appreciated as well.

Jennifer Merin: Paris Can Wait is a rich repast for Francophiles and foodies, and women who are hungry for more romance in their marriages. Writer/director Eleanor Coppola serves up her first feature at age 81 — a remarkable and inspiring achievement, especially since she does it so deliciously. Replete with with elegant character development, a superb cast and stunning cinematography, Paris Can Wait is a satisfying escape into a lifestyle that is pure fantasy for most of the world’s women. Take time to savor it. Read full review.

Susan Wloszczyna: This slight yet diverting travelogue that meanders through the picturesque heart of France cares more for cheese courses and wine pairings than about what my husband likes to call “making good time.” It also finds no shame in literally stopping to smell the roses or invoking the pastoral indulgences of Manet’s The Luncheon on the Grass (minus the naked lady) when a car breakdown leads to a leisurely picnic. Gastronomic pleasures abound, but nothing is more delicious than its star, Diane Lane, still an incandescent stunner at the age of 52. Eleanor Coppola (wife of Francis, mother of Sofia), a veteran 81-year-old documentary filmmaker doing a narrative feature for the first time, proves she can keep up with the other movie-making members of her clan by cleverly using an episode from her own life as the basis of an intimate road trip with a flirtatious Frenchman at the wheel. Interview with Eleanor Coppola.