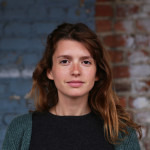 Filmmaker Justine Harbonnier takes us to Montreal, where the city’s oldest house is being moved to make way for posh modern condos. Her profound and poetic film reflects her questions about how such moves impact a neighborhood and its residents, and others who pass by without even noticing these changes that effect the future of their city. Read what she has to day about making the film and her future plans on THE FEMALE GAZE.