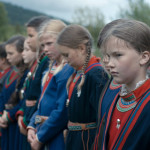 When a film transports you to a society you never knew existed, it can prove magically transcendent while incredibly moving. Add an adolescent female discovering what she is capable of and you have me hooked. That happened last year with The Eagle Huntress, a documentary about a Mongolian girl’s singular feats with her regal bird of prey. And it happens again in a far different arena with the 14-year-old female Laplander who is the focus of Sami Blood, a Swedish coming-of-age drama handled with an impressive delicacy of purpose by first-time filmmaker Amanda Kernell.

Bookended with a contemporary tale is the central story set in the 1930s of Elle-Marja, the child of indigenous reindeer breeders whose father has just died. When she and her younger sister are sent away to a Sami-only school, they are subjected to ugly prejudicial assumptions based on their race.

Such demeaning treatment causes Elle-Marja – who changes her name to Christina — to reject her heritage and run off to the big city where first love, education and potential opportunities await.

Few Hollywood portraits of adolescent rebellion would dare to touch upon the complexities that Kernell captures with a tenderness that eschews easy sentiment. And few young actresses could provide the depth and shades of emotion that Lene Cecilia Sparrok (who could be Elizabeth Olsen’s double but with added cheekbone action) imparts to her role.