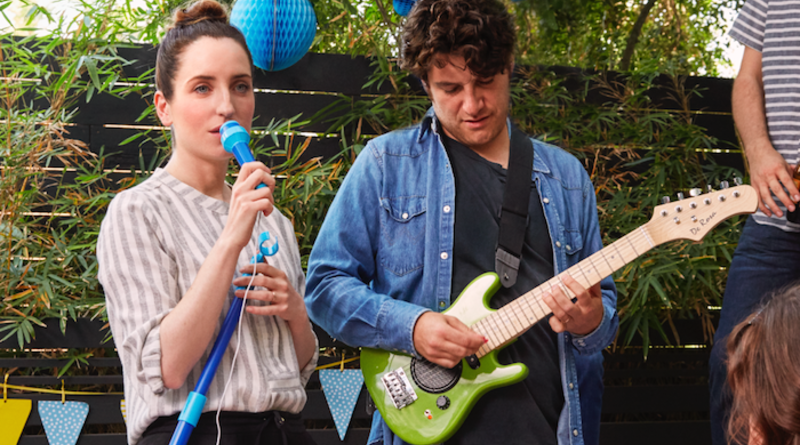 A young married couple who just can’t stop arguing decide to turn their fights into songs, in the indie comedy BAND AID. Writer/director/producer Zoe Lister-Jones also stars in this film, her directorial debut. BAND AID is lifted by its well-done musical sequences, tuneful and surprisingly enjoyable, but the humor is more uneven.

Lister-Jones will be familiar to some audiences from her role in TV’s LIFE IN PIECES, and her co-star from that show, Colin Hanks, has a cameo in this film. Lister-Jones chose a mostly female crew for her film, which premiered at Sundance this year.

The couple’s fights start over ordinary things like washing the dishes but then go off in loopy directions (how does an argument about dirty dishes become something about respect for Holocaust survivors, particularly when both of the pair are Jewish?). While they argue angrily about housework, they avoid the bigger issue – their grief over a miscarriage.

As their arguments reveal, the couple had problems even before the lost pregnancy. Anna (Zoe Lister-Jones) is a writer haunted by feelings of failure since her book deal fell through and Ben (Adam Pally) is an artist doing unfulfilling work designing logos for corporations. Frustrated over their stalled careers (although they are doing well enough to have a modest home in California), they take out those frustrations on each other. Both have some legitimate gripes – Ben really is too lazy to wash the dishes piled in the sink, Anna is emotionally explosive over small things and says crazy, mean things to win a fight. But the pair are trying to stay together, and go to couples’ therapy. It’s not helping, and when their therapist says she’s moving, they know they have to figure it out on their own. When Anna comes up with the crazy idea to form a band and turn their arguments into songs, Ben unexpectedly agrees. With Ben on guitar and Anna on bass and singing, they turn their garage into a practice space. Their practice sessions brings in their socially-awkward neighbor Dave (Fred Armisen), who offers to play drums.

Listening to this couple argue is painful stuff, making viewers squirm and wonder why these two are still together but once they start to make music, everything changes, The film takes a more enjoyable turn and the characters are transformed. One expects the music in this kind of low-budget film to be lame but it is surprisingly good, and the “argument songs” are funny as well as quirky. There is energy and authenticity in the music scenes, as cast clearly are really playing. Lister-Jones has a fine voice, Pally played guitar in high school, and Armisen played drums in a punk band before his time on Saturday Night Live. Once the band gets going, the film picks up and becomes rather fun, although it eventually goes back to the darker relationship theme.

Zoe Lister-Jones gives a good performance as Anna, who is appealing despite her personal pain and emotional swings. Pally is fine as Ben but his character is a paler presence than Anna. Even Armisen does well as the odd-ball neighbor, particularly once he starts playing with the band.

In addition to the lively music scenes and Lister-Jones’ appealing performance, other good points of the film include nice photography by Hillary Spera. The best parts of the film are the music scenes, almost good enough to carry the whole film, with songs composed by the women-led band Lucius.

On the other hand, Armisen’s odd-ball character provides a side story that is supposed to add the requisite indie-film quirk, but it actually teeters uncomfortably between just weird and slightly creepy. Unfortunately, once the story gets on nice upward track, it then derails. Lister-Jones seems to be attempting to inject a dose of reality but the effort leads to an unsatisfying ending for audiences. A “men are from Mars, women are from Venus” lecture undermines the film’s pose of being modern relationships. And, by the way, men should do the dishes.

Overall, BAND AID is a moderately entertaining relationship comedy, that is at its best when the band is playing.