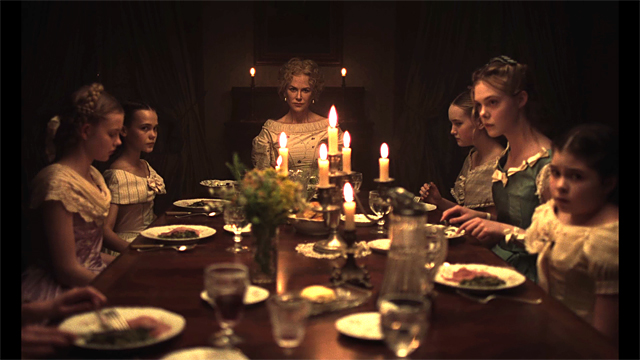 With her sixth feature, director Sofia Coppola can no longer be denied the appellation of auteur… if she ever could. The lush visuals, sultry atmosphere, and almost serene sense of the sinister that infuses The Beguiled add intriguing new layers to the distinctive signature approach to cinematic storytelling Coppola has been developing since her debut with 1999’s The Virgin Suicides. Continue reading… 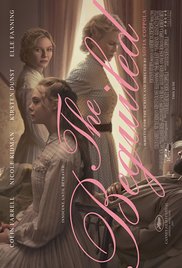 Her win for Best Director at the Cannes Film Festival this spring, only the second time a woman has earned the acclaim, didn’t only strike a blow for women’s progress in the field: it cemented her reputation as a director with whom we must continue to reckon.

The Beguiled is Coppola’s femininst reimaging of the 1971 film of the same name, in which a wounded Union soldier is taken in by the teachers and students of a girls’ school in the Confederacy during the American Civil War. Clint Eastwood was very much the hero of Don Siegel’s film, in a story the director believed, horrifically, was about “the basic desire of women to castrate men.” Coppola literally flips the script, and places the school’s teachers (Nicole Kidman and Kirsten Dunst) and five remaining students — the eldest of which is portrayed by Elle Fanning — at the center of the tale, with Colin Farrell’s soldier arguably the story’s villain… or at least a powerfully provocative disruption to this all-female household. His presence alters the wary dynamic at the school: the girls and women, already uneasy about their vulnerability during wartime, suddenly find new danger in him, and spy possible escape with him. The manipulative interactions among the women and between them and the interloper man highlight the limited ways that narrow gender expectations allow men and women to understand and relate to one another.

It’s rare to see a film like this one, with so many juicy roles for women, roles that run a wide spectrum of humanity: the women here are brave or cowardly, smart or gullible, innocent or full of guile. Yet the women do not run the full spectrum of humanity: they are all white, a bit of a puzzlement for a film set during the Civil War, and Coppola has come under fire for eliminating a black slave character who was present in the 1971 film. It is a wholly valid critique that The Beguiled ignores the intersectionality between class and race and gender that many feminists have come to insist is vital to the philosophy and to any advancement of women’s rights. Still, a debate about whether The Beguiled may not be feminist enough represents remarkable progress in the ongoing discussion about women’s representation onscreen. — MaryAnn Johanson

Susan Wloszczyna: In writer-director Sofia Coppola’s hands, Colin Farrell’s fallen warrior mostly does what he can to ingratiate himself with the female inhabitants in order to fully heal and then take his leave despite being a mercenary Rebel soldier. Of course, he curries their favor by fulfilling whatever male role they need him to assume. Father figure, lover, gentleman suitor, intellectual equal, handy man, friend – he is their male fantasy in the flesh at a time when most men were otherwise engaged. But from the start, he is clearly underestimating the power of the sisterhood shared by these members of the opposite sex. Unlike the original “Beguiled,” which was more erotic, pulpy and vengeful, Coppola presents an intoxicating portrait of feminine fortitude in the face of hard times. Read full review.

Jeanne Wolf: Sofia Coppola goes heavy on Southern Gothic atmosphere in The Beguiled with plenty of help from Nicole Kidman, Colin Farrell and a fine supporting cast led by Kristen Dunst and Elle Fanning. The suspense mounts slowly but its worth the wait as simmering passion and jealousy boil over in a shocking climax. It’s all about the power of one man to bring out the best and worst in a house full of women who aren’t immune to his seductive charm.There are more than a few moments of dark humor along the way but when Kidman cries,“Bring me the saw! ” you know that bloody vengeance is coming.

Nell Minow: It is fascinating to see a well-known Clint Eastwood film reworked to give us the perspective of the women in the story. Director Sofia Coppola has a gift for telling stories about female characters who may appear to be more ethereal than they are.

Jennifer Merin: Sofia Coppola’s unique style and spectacular approach to storytelling and instinct for the spectacular revision Don Seigel’s 1971 eponymous film with a female twist. In The Beguiled and each of her previous five feature films, Coppola clearly demonstrates that cinema is a director’s medium, and she is in full control of its elements.

Cate Marquis: Sophia Coppola’s atmospheric period thriller THE BEGUILED is a re-make of a 1971 psycho-sexual thriller starring Clint Eastwood. Coppola re-frames the Civil War story from a woman’s viewpoint, where a wounded Union soldier is taken in by a house full of Southern women and girls at a young ladies’ boarding school in the rural South. What looks like a sexual fantasy come true for the soldier turns out less than dreamy. Read full review.

Pam Grady: Sofia Coppola does a masterful job of creating a hothouse atmosphere in which the repressed denizens of a Southern girls school fall under the spell of the wounded (and charming) Union soldier the bring into their lives with explosive results. Nevertheless, Coppola’s latest can be described as problematic—at best. In endeavoring to remake a 1971 Don Siegel/Clint Eastwood, she strips the story of a crucial character, a slave, because she has said she didn’t feel she could give the character and the subject of slavery the respect they deserve. So, it’s only a side bonus then, that by removing, that character, her women are no longer implicated in one of American society’s greatest shames even as it robs the story of historical context? And in terms of the overall arc of her career, it means that once again, the writer/director does not have to imagine life outside of her own privileged bubble.

Anne Brodie: Sophia Coppola reveals wicked humour in the excellent Gothic chiller The Beguiled. A repressed and bolt upright marm runs a “school” for little girls. It’s Virginia in the waning days of the Civil War, it’s hot and humid and the rigid clothes and marm’s ever watchful eye keep everything unbearably tidy. The youngest child finds a badly wounded Union solider in the woods while picking mushrooms and brings him home. He is a “blue belly” in Confederate territory but his slashed leg requires stitching. He’s a handsome lad and soon all are competing for his favours while throwing etiquette books and the Bible out the door. They are all in on it. Marm says that kind of tomfoolery just won’t do so she orders him to leave but only when he is fully recovered. The winking nature of this wild sex tragedy is entertaining and it is also deeply funny. The dual sensation is lovely. Coppola pushes our buttons in this masterful, snappy and emotionally efficient jewel of a film.

Screenwriter: Sofia Coppola, based on the novel by Thomas Cullinan