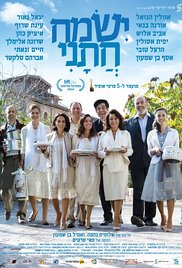 It is with a light and generous heart that I suggest anyone within reach of a movie theater showing The Women’s Balcony pack up your necessities and head there at your earliest convenience. What will unfold over your 96 minutes in the dark is a comedy so droll, so full of love and celebration, and so wise in its mild cautions that you may see the world much differently when you emerge into the light. The Women’s Balcony, a major hit in Israel, offers a look at an orthodox Jewish community—and community is what makes this film so endearing and healing.

As the film opens, men and women move rapidly with a buoyant excitement through the narrow streets and alleys of ancient Jerusalem bearing casseroles and chasing after escaped liters of pop on their way to their tiny synagogue. A bar mitzvah is to take place, though the white-garbed, formally attired women give the impression that they are attending a mass wedding. They watch with pride from the women’s section, a balcony above the sanctuary, as the grandson of Zion (Igal Naor) and Ettie (Evelin Hagoel) stands to read his torah portion just as the candy the women customarily throw on the bar mitzvah boy (Yair Parash) arrives after being left behind in all the excitement.

At that moment, the middle section of the balcony collapses. The torah is destroyed by the falling concrete, and several people are injured, including the rabbi’s wife, who is hospitalized in a coma for the duration of the film. The rabbi (Abraham Celektar), inconsolable about his wife’s condition, can no longer lead the congregation. The glue that held this community together starts to come unstuck.

The milieu, though possibly not the plot, of The Women’s Balcony is based on screenwriter Shlomit Nehama’s upbringing. Her knowledge of and affection for the ways of her Orthodox Jerusalem community make it easy for viewers to become immersed in and identify with a culture they may never have seen before. What is particular to this community—kissing mezuzahs affixed to door jambs, using a non-Jew to perform tasks that Jews are prohibited from doing on the sabbath, trying to form a minyan (10 men) needed to hold a religious service—is educational for non-Jewish viewers and stirs familiarity and affection in Jewish audiences. What is universal—the easy love between Zion and Ettie, the exasperation of Ettie’s unmarried niece Yaffa (Yafit Asulin) at the constant nudges to find a husband, the bar mitzvah boy who thinks the collapse was his fault for not learning his torah portion and hoping something would prevent his embarrassment in front of the whole community—brings us all into communion with their humanness.
Despite the liberal doses of humor that keep the film moving briskly, Nehama set out “to tell the story of the moderate people who are forced to deal with growing religious extremism.” The snake in the garden is young, charismatic Rabbi David (Avraham Aviv Alush), who comes to the congregation’s rescue by rounding up a group of his acolytes to help them form a minyan at their temporary sanctuary in a storefront. He offers to preside over their services during their rabbi’s indisposition and even smooths the permitting process so they can rebuild their synagogue. Through these favors he claims a subtle, but powerful debt of obedience from the congregants and attempts to turn them toward a more extreme form of worship that would have the women banished from the main synagogue and pushed into more modest attire and behavior.

First-time feature director Ben-Shimon shows a sure hand in handling the script’s tonal shifts and providing a rounded picture of all of the players. He makes Zion and Ettie the core of the film and the exemplar of the health of the community, reveling in their playful and happy marriage. As Rabbi David’s influence starts to push the men into uncomfortable actions—giving their outraged wives headscarfs, allowing the women to be put in a cramped annex outside the sanctuary after the synagogue is made usable, allowing themselves to be discouraged from consulting with their rabbi on these and other changes—arguments escalate among the congregants. Close friend Ora (Sharon Elimelech) breaks with Ettie and starts wearing modest clothing full time, an ultra-Orthodox little boy is prevented from visiting Zion in his store, and most of the women leave their homes or force their husbands to sleep on the couch. We feel the pain of this group of once-happy people reduced to misery and strife by a wolf in black frock coat and hat spouting pieties designed to divide and control.

It is wonderful to see women so honored and central to the life of this community and their impassioned resistance to demotion, a shocking betrayal of what the community stood for—the love for their rabbi and his wife, and at base, for their faith, strong anchors in rocky seas. In the end, love has the final word. The old rabbi receives much-need medication through a deception that is a scene of comic genius and, sanity returned, he visits his comatose wife and returns to his flock. We have no doubt that the reawakening of the community she served will help speed her recovery.