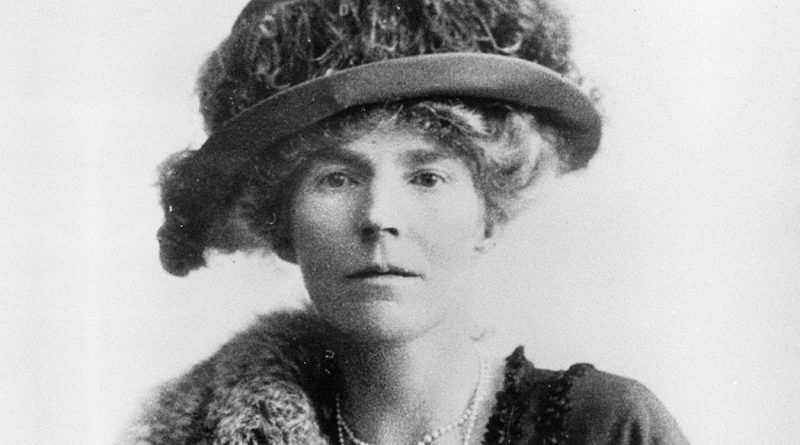 The word indefatigable may well have been fashioned for the likes of Gertrude Bell. At a time, when women were largely confined to the domestic sphere, Bell climbed mountains, rode camels, palled about with Lawrence of Arabia, and penned letters, mountains of them, all the while dressed in impeccable fashion.Continue reading… 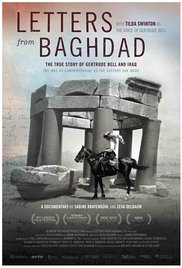 Werner Herzog’s 2015 biopic, Queen of the Desert, cast Nicole Kidman in the personage of Gertrude Bell, but in the biodoc, Letters from Baghdad, she is brought to vivid life through the cut glass narration of Tilda Swinton.

Co-directors Sabine Krayenbühl and Zeva Oelbaum have unearthed a veritable treasure trove of archival footage, images, and photographs (many of which were taken by Bell herself). But it is Bell’s letters that form the spine of the film, detailing her early life (girlhood and Oxford education) and her subsequent introduction to the heady climes of the Middle East. It is here, where as the she writes that she truly became a person. In letters and diaries she detailed all of her adventures, journeying from Istanbul to Syria, interviewing and photographing warrior tribes, enduring desert storms, wearing enormous confections of hats, veils, and occasionally even a fur stole, the very image of the indomitable English woman.

But this image is not without some problems, as English colonialism at its height, and Bell was every inch a child of the Empire. A fact that became explicitly evident when her intimate knowledge of the region and its people became highly prized during WWI. In 1915, Bell entered the war effort with the British forces, the first female officer in the history of military intelligence. The dizzying horse-trading between Western powers over the region, eventually gave rise to the creation of the nation state of Iraq, in which Bell played a central role.

Bell’s life and adventures have already been the subject of a number of literary biographies, and to its credit, Letters from Baghdad adds another layer of visual richness, a palimpsest of images and film clips from the past that are as fragile and gossamer as the faded, ice-cream colours of the hand-tinted footage. It is more than enough to let the pure pleasure of these images wash over you, while listening to Tilda Swinton bring Bell’s erudition, passion and courage to surging life.

But the film relies, often a little too heavily, on recreations of the people Bell knew and worked with including T.E. Lawrence and Vita Sackville-West. There is an inherent awkwardness to these pantomime characterizations that detract from the narrative. One wishes simply to let the woman tell her own story, in fine epistolary fashion. — Dorothy Woodend

Betsy Bozdech Even if you’re already familiar with the name “Gertrude Bell,” chances are you don’t know just how significant a part she played in shaping Britain’s relationship with the Middle East. Bringing Bell’s own words and memories to life via a combination of voiceover narration, reenacted interviews, and impressive archival footage, directors Zeva Oelbaum and Sabine Krayenbuhl cement Bell’s place in history while simultaneously introducing audiences to a very real, very human woman who made mistakes but cared passionately about the land and people of her adopted homeland.

MaryAnn Johanson Bell’s insights, wisdom, intelligence, and humor are so enrapturing that I entirely forgot I was listening to Tilda Swinton, who reads Bell’s letters in voiceover: Bell’s extraordinary take on the world and her place in it upstages even the actor’s distinctive voice. This is a phenomenal portrait of a determined, spirited, independent woman in an era when such qualities were not appreciated in women, and of a moment in political history that continues to reverberate today with catastrophic impact. Read full review.

Sheila Roberts: Zeva Oelbaum and Sabine Krayenbuhl’s visually stunning documentary, “Letters From Baghdad,” offers a fascinating look at the life of Gertrude Bell who was an extraordinary figure in British history. She was not only a gifted writer and linguist, but also an explorer, political officer, diplomat and archaeologist who helped shape modern Iraq after WWI. In an era when colonial powerbrokers were male, the Oxford-educated Bell defied convention and Victorian expectations of women and travelled extensively throughout the Near East where few Westerners had ventured before. She acquired an expansive knowledge of and familiarity with the region, its history, languages and tribes which enabled her to play a pivotal role in British imperial policymaking following the collapse of the Ottoman Empire. Her rich and unusual story is told from the unique perspective of the players of that era using their own words via dramatized interviews with actors portraying them. The film features rare and stunning archival footage of Baghdad, Cairo, Damascus, and the Arabian Peninsula from the early 1900’s. It’s accompanied by Tilda Swinton’s heartfelt voiceover narration quoting extensively from Bell’s private diaries and large collection of letters which capture her passionate inner life. Bell was also an accomplished photographer. Interspersed throughout the film are gorgeous still photographs she took documenting her exotic travels and archaeological adventures. The film also reveals Bell’s influential role in the establishment of the Baghdad Archeological Museum in 1926 which became one of the gravest casualties of the US-led war in Iraq. Swinton and Thelma Schoonmaker serve as Executive Producers. Krayenbuhl is also the film’s editor.

Anne Brodie: Gertrude Bell, known as Dame Margaret Hall, was born to an influential and well-to-do political family in England in 1868. She became the most powerful woman in the British Empire, as a writer, traveller, political officer, administrator, archaeologist and spy in the years leading up to WWI. Among her circle were T.E. Lawrence, Winston Churchill and Vanessa Bell and other elites. Bell’s family sent her to the Middle East to “get rid of her Oxford-y manner!’ and it stuck. She was fascinated by the cultures, people and histories of the Greater Syria, Mesopotamia, Asia Minor, Jordan, Arabia and Iraq and was able to map out landmarks, wells, tribes, leaders, lineage and contacts to pave the way for Britain’s eventual occupation. Bell shaped political policies in the area many of which stand today. Bell’s films of her travels are used extensively and her own words spoken by Tilda Swinton, of letters, secret notes and personal diaries. This well made doc is especially remarkable for its look, the dusty, ancient and timeless world and for its unblinking presentation of this brave, pioneering and eccentric woman.

Cate Marquis: Middle East experts often point to how national boundaries were drawn by European colonial powers after World War I as essential to understanding region’s modern tensions. A little known fact is that a British woman played a central role in the shaping of those boundaries – Iraq in particular. That woman, Gertrude Bell, is the focus of the documentary LETTERS FROM BAGHDAD from directors Zeva Oelbaum and Sabine Krayenbuhl. Read full review.

Pam Grady: The correspondence of Gertrude Bell, a key figure in the creation of modern-day Iraq, forms the foundation of this dazzling documentary that combines evocative archival footage, actors in the roles of Bell’s contemporaries adding their take on events, and Tilda Swinton as the voice of the intrepid Bell. What emerges is not just an insightful portrait of Bell, but of the roots of current Mideast conflict forged by the colonialism of a century ago.

Nell Minow: This is not as much a remake of the 1971 original as it is in conversation with it, a sympathetic retelling that gives the female characters more complexity and shifts the balance of the scales of justice in their direction. Sofia Coppola’s ethereal, exquisitely arranged images can sometimes feel claustrophobic, but in this case that works well for the story of isolated women trying to hold on to some sense of civilization and order amidst the chaos of a civil war.

Production Company: Between the Rivers Productions