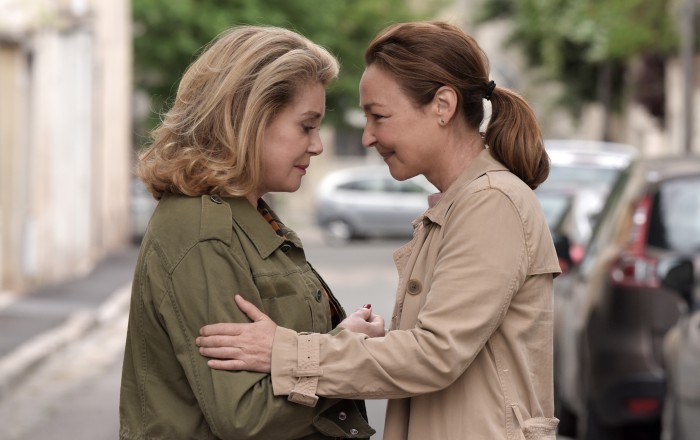 Two women, one old wound, and a whole lot of wine. Boiled down to its essential ingredients, Martin Provost’s new film The Midwife is diverting enough, filled with small pleasures, and sometimes that is enough. Especially when the two women are so beautifully portrayed by Catherine Deneuve and Catherine Frot. Continue reading… At age 49, Claire (Catherine Frot) is set in her ways. Dedicated to her job (birthing those babies), her vegetable garden, and her twenty-something son Simon, she has a tidy and controlled existence that is just this side of spartan. But life has a way of intruding, and that is precisely what happens here. Into Claire’s modest world, comes a blast from the past in the form of Béatrice (Catherine Deneuve) a blond hurricane in a silk scarf and heels, filled with an outsized appetite for food, wine, gambling, and life.

The mistress of Claire’s father Antoine (a former swimming champion), Béatrice disappeared thirty years earlier, leaving a teenage Claire to pick up the pieces of her shattered life. But Béatrice needs help – she has a brain tumor and grin prognosis. More importantly, she also wants a chance to make amends.

What follows is a bit of cage match, as the two women circle each other, revisiting old betrayals, as well as new dependencies. Provost handles his central characters with a sure hand, and it is a huge pleasure to witness Deneuve, blowsy and carefree, as she plows through red meat and good wine, gambles and smokes with brio. In a few sections, she almost resembles Cassevete’s archetypal tough dame Gloria (Gena Rowlands). Frot has a much less showy role, but she is interesting enough to watch as the grimly prim Claire, who gradually loosens up under the assault of Béatrice, as well as a new love interest, a long-distance trucker played by Olivier Gourmet.

But the narrative feels a bit shopworn, and you can practically see the plot developments telegraph themselves from miles off. It feels perhaps greedy to want a bit more from these two formidable actresses, a few moments of genuine surprise to upset the carefully controlled and mediated nature of the film itself. More red meat, covered in Béarnaise, and served with frites, instead a green salad and tap water, s’il vous plaît? — Dorothy Woodend

MaryAnn Johanson: The Midwife gets right everything that so many other movies about women get wrong: this is a delicately wrought portrayal of the challenges women face in midlife and beyond, and of how our friendships are so key to shaping our lives (even if that shaping is sometimes negative). It’s nuanced and unsentimental yet genuinely moving without having to force any of the many emotions it conjures. And it demonstrates that it’s perfectly possible for male filmmakers (in this case, writer-director Martin Provost) to understand women well enough to do our stories justice. There may not be a lot that’s actually surprising in what happens between these two women, but the lived-in quality of these characters — fueled by a formidable chemistry between stars Catherine Deneuve and Catherine Frot — and the authenticity of their journeys separately and together is terrifically satisfying. Stories this good about women’s experiences shouldn’t be so rare. Read full review.

Betsy Bozdech Catherine Deneuve and Catherine Frot give authentic, convincing, lived-in performances in Martin Provost’s slice-of-life French drama, which weaves themes of life, death, family, forgiveness, and self-acceptance into a compelling story of two women who couldn’t be more different but who need each other to find peace. The birth scenes are particularly realistic and emotional; it’s rare to see such raw humanity on the big screen.

Sheila Roberts: Catherine Deneuve and Catherine Frot deliver strong performances in “Midwife,” writer-director Martin Provost’s moving, smartly written tale about an unlikely friendship between opposites that leads to redemption and forgiveness. Frot’s dedicated midwife at a local maternity hospital is an ideal foil for Deneuve’s free-spirited mistress who learns she is dying and reaches out to her former lover’s daughter. Their journey together is filled with pointed humor and incisive observations about life and their shared experiences slowly transform their lives in unexpected ways. Olivier Gourmet and Quentin Dolmaire turn in solid supporting performances.

Nell Minow: Both Catherines give performances of enormous sensitivity and power in this story of two women whose connection is much more than the man they both loved years ago.

Anne Brodie: Catherine Deneuve is Béatrice an ageing gypsy, moving from place to place and life to life unaware of those she leaves in her wake. She’s down on her luck, penniless, homeless and she’s just learned she has terminal cancer. She connects with Claire, played by Catherine Frot, the daughter of a man whose life she ruined, looking for a handout and sympathy. Claire is resentful and still hurting after her father’s suicide but she is a nurse and feels compelled to help despite twenty years of growing anger towards Béatrice. Claire knows she is a manipulator and user of the highest order but accepts that she needs someone to care for her. These mighty actors send Martin Provost’s story soaring, as our loyalties shift between the women, as we hope for the détente and understanding. These women build a lifelike relationship that is emotionally gripping and rich, truthful and devastating.

Jeanne Wolf: “The Midwife” is worth watching just to see two great actresses share the screen as women with entirely different personalities and views on life. It is funny and touching to see Catherine Deneuve fighting aging and illness – nothing like you’ve ever seen her do on the screen before. I couldn’t stop staring at this beauty with too much and too smeary make-up — too many dress sizes up–too wobbly in her high heels. What kept me riveted was her spirit- the kind of “watch me be naughty and excessive” attitude that only a woman who has been adored by men her whole life can live out. Read full review.

Jennifer Merin: A beautiful cinematic duet for the two Catherines, both superb actresses, as composed and conducted by writer/director Martin Provost.

Cate Marquis: Writer/director Martin Provost brings together these two great French actresses in a story written specifically for them. The story is both about the characters’ personal journey, their shared history and present relationship, and, indirectly, about a changing France, Paris in particular. The scenes in the movie allude to shifts in French society, from the world of cafe and smart shops of the past, to a modern diverse city, but all is told through the relationship between these two women. Read full review.

Cynthia Fuchs: ‘We’ll never understand each other.” Claire (Catherine Frot) stands abruptly, ready to leave the restaurant where she’s just sat down with Béatrice (Catherine Deneuve). A long shot near the start of Martin Provost’s The Midwife (Sage Femme) reveals other diners, oblivious to the drama at center screen. Béatrice gazes up at Claire, surprised at her upset: “We were just starting to be friends again.” Read full review.