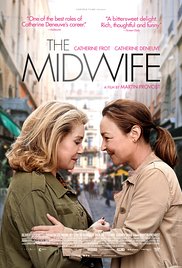 ‘We’ll never understand each other.” Claire (Catherine Frot) stands abruptly, ready to leave the restaurant where she’s just sat down with Béatrice (Catherine Deneuve). A long shot near the start of Martin Provost’s The Midwife (Sage Femme) reveals other diners, oblivious to the drama at center screen. Béatrice gazes up at Claire, surprised at her upset: “We were just starting to be friends again.” Continue reading…

Claire doesn’t see it that way, but she sits again, for a moment. The brief exchange that follows adds detail to the backstory you know a bit about, that Béatrice 30 years ago had an affair with Claire’s father, and that when she left him, he killed himself. You also know that they’ve met this afternoon because Béatrice is facing a devastating diagnosis of brain cancer, and Claire, who has felt betrayed for 30 years, isn’t sure whether to help or abandon Béatrice. Claire’s dilemma is complicated by her own changing circumstances: a midwife at a clinic that’s closing, she has a son in medical school, a grandchild on the way, and an estranged relationship with her own mother. That, and, she’s just met Paul (Olivier Gourmet), an international truck driver who’s equal parts sensitive, devoted, and absolutely supportive of her independence.

As much as Claire prides herself on that independence, the film suggests that she’s rather too fond of order, and in need of just a bit of the charismatic wildness embodied by Béatrice. Their opposition is too plainly laid out: while Claire avoids red meat, doesn’t drink, and rides her bicycle to work, Béatrice smokes cigarettes, drinks to excess, and loves prime rib. When Claire lectures her on taking better care of herself, she waves her hand: “I believe in the power of pleasure,” and mutters to herself that Claire’s “a pain in the ass, just like her father.”

Here the camera lingers on Béatrice, after Claire has left the scene, insuring that you see what Claire does not. You also see Béatrice in moments that Claire does not, gambling in stereotypical back rooms full of stereotypical gangster types. The film also shares with you Béatrice’s experiences as she sees them, the frame blurring or in hectic motion when she feels faint. Claire’s emotional trajectory is less erratic, but obviously influenced by Béatrice’s chaos, as her evolving intimacy with Paul includes repeatedly compassionate and frankly brilliant work as a midwife, as well as a charmingly awkward sex scene that leads to a morning view of flowers and blue sky.
The film’s order is Claire’s. As much as she initially rejects Béatrice’s recklessness, she and you come to see that her more exigent handicap is her own anger, self-limiting and based on fear. And so, as Béatrice serves as Claire’s “magical” figure, her model for a more fulfilled, less confined life, that role is in itself clichéd and constricting. By film’s end, you’re hoping against hope that she’ll break free.