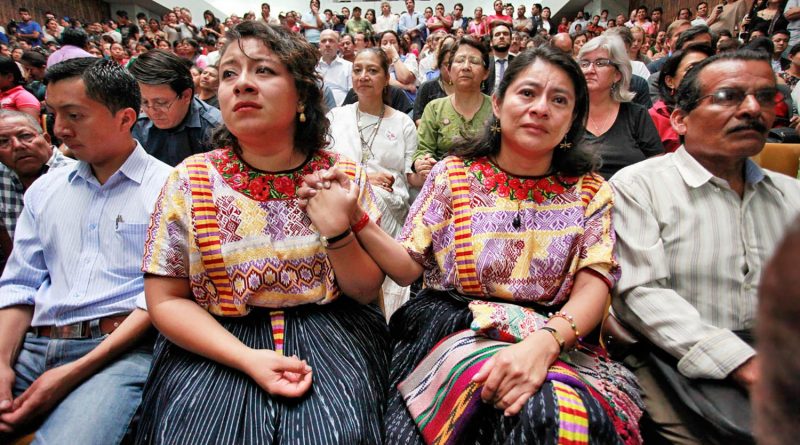 500 Years is the third film in director Pamela Yates’ trilogy about Guatemala. Expansive in its coverage, and impassioned about its subject, the film is very much a classic social justice documentary, right down to the final scenes of enormous crowds thronging the city streets, demanding change. Continue reading… Ms. Yates began documenting Guatemala’s political upheaval in 1983 with When Mountains Tremble, and continued in Granito: How to Nail a Dictator (2011). In this final chapter,  the story is divided into three sections that delineate the fight of the Mayan people against acts of oppression and genocide perpetrated by government forces. Journalist Irma Alicia Veláquz Nimatuj, whose columns describes her country’s evolving social and political consciousness, is joined by a new generation of Mayan activists including Andrea Ixchiu, who starts a media collective. Together, these two women function as both guides and interlocutors to Guatemala’s complex and often torturous history.

The film’s initial chapter is centred around the trial of General Efraín Ríos Montt, accused of crimes against humanity and genocide. The majority of the story takes place in a courtroom setting, with Montt and a team of lawyers ranged against indigenous Mayan people, who describe the atrocities that took place in the early 1980s. After coming to power in a coup d’etat, Montt’s forces, backed by American support, murdered Ixil Mayan people with ruthless efficiency, destroying some 626 villages across the country. As people tell their stories, often overwhelmed by emotion, Montt’s lawyers stage a coup of their own and attempt to leave the courtroom, only to be forcibly returned.

The film’s second section follows the rising political movement, informed by earlier examples from the 1950s. A particularly poignant story is that of Julio Solórzano Foppa, whose mother Alaíde Foppawas one of the 45,000 disappeared. He visits the site of a former detention center where ordinary citizens (artists, students, and activists) were raped and murdered. The building has been repurposed as an arts centre, as a means of reclaiming some measure of humanity from the horrors of the past.

The final chapter follows the political fate of former president Otto Perez Molina, ousted from power by a popular uprising, when the full scope of his government’s political corruption is revealed. The influence of American corporations is again a enormous factor, with mining licenses issued to US companies that would virtually cover the entire countryside, as Irma Alicia Veláquz Nimatu notes: “A mine every sixty miles in Guatemala.”

The film could benefit from a more rigorous structure, often people are introduced with little context, and Guatemala’s complex history is made harder to follow by the film’s looping timeline. For additional clarity, it is worth reading Yates’ comments about the film, as well as material about her own role in the story. But ultimately, it is difficult to quibble with the exultant process engendered by activists, journalists, artists, and ordinary folk that brought the country together. In the film’s final scene, no words are needed at all, only the collective efforts of a group of laughing young women, raising a enormous kite high into the air. — Dorothy Woodend

MaryAnn Johanson: Is the decades-long story Pamela Yates has been telling in her journalistic films finally finished? I’m gonna guess not, because no matter what happens in the coming years in Guatemala, even if justice prevails and it’s full steam ahead on democracy and people power, Yates beautifully demonstrates in this third chapter of her documentary trilogy that revolution and progress are not finite tasks but never-ending, always evolving ones. Yates’s depiction of the collective force underdog cultural minorities — such as exploited indigenous peoples, women, and both in tandem — can wield when they work together is a blueprint for us all, no matter which injustices we are battling.

Betsy Bozdech Paula Yates’ ambitious documentary is simultaneously inspiring, empowering, and sobering. It’s impossible not to see it at least partially as a cautionary tale for the United States’ own social-political turbulence; one can only hope that we’re not headed for the kinds of horrors faced in Guatemala. But ultimately the film is hopeful for progress, change, and justice. As one lawyer fervently states early in the film, “Seeking justice is not revenge nor vengeance. Seeking justice is not about ideologies, left or right. Seeking justice is a right.”

Sheila Roberts: Political filmmaker Pamela Yates’ inspiring documentary, “500 Years,” is told from the perspective of the indigenous Mayans of Guatemala who have struggled for centuries against oppression at the hands of an often brutal and corrupt ruling class. Set between 2013 and 2016, the film begins with an historic genocide trial and ends with a citizens uprising that overthrows a President. Yates examines how rural Mayans joined forces with their country’s disenfranchised urban middleclass to confront a repressive government and demand a larger voice in the future of their country. The film is beautifully lensed by Melle van Essen and features a melancholy score by Roger C. Miller. In this final installment of her Guatemalan trilogy, Yates combines riveting courtroom coverage, archival footage, and recent interviews to capture the raw emotion of an indigenous people seeking justice and finding hope.

Liz Whittemore: 500 Years is a chilling documentary about Guatemala’s indigenous Mayan people and their fight against a capitalist and corrupt government. With the small elite population pushing their way of living to the brink of literal extinction, they must continue to pass down the truth of genocide. 500 Years may serve as a frightening warning for those of us in the US that are part of the resistance movement. A demonizing of the people by a portion of the media, created criminal accusations, and symbolic waving of the hands to say, “Look over here​,​” while the real atrocities go unnoticed. This film should be studied and spread like wildfire.

Jennifer Merin: 500 Years is the third and final film in Pamela Yates‘ extraordinary three-film documentary series about the Mayan people’s ongoing struggle for equality and justice in Guatemala. With her politically-charged trilogy, The Resistance Saga, Yates has actually changed the course of history. 500 Years is the culmination of 35 years of filmmaker dedication to coverage of a pressing social and political issue. Stand alone or viewed with it’s companion films, it is a masterful example of how movies can make a difference. The film and its companion documentaries are must-sees for anyone who is interested in understanding current events and the role media can play in shaping them. Read full review.

Cate Marquis: Director Pamela Yates well-made, affecting 500 YEARS is the third and final film in her documentary series on Guatemala and the Mayan people’s ongoing struggle for democracy and justice in that country. Although the film is the third in the series, it stands well on its own, recapping critical points from the first two films. Clips from the first two films, WHEN THE MOUNTAINS TREMBLE and GRANITO: HOW TO NAIL A DICTATOR, are included in this final one. The first film, in 1983, actually provided evidence in the trial of former military leader and president Montt, that trial being the subject of the second film. Read full review.

Pam Grady: Pamela Yates’s third film on Guatemala—the first, When Mountains Tremble, made in 1983 during the heat of that country’s civil war—packs a lot into a lean, 109-minute running time. The trial of General Rios Montt, a US-backed civil war-era dictator, for genocide; the indigenous Mayans’ struggle against a racist ruling class and rapacious, environment-destroying corporations; and corruption that reaches the highest level of government are only some of the topics in a documentary that, indeed, touches on hundreds of years of history. It is a work of passionate advocacy, but so overstuffed with detail, that it ultimately delivers more heat than light.