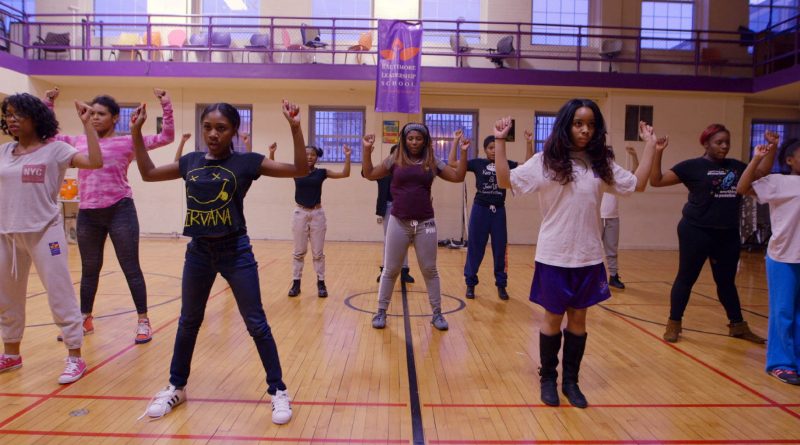 An inspiring documentary about a group of African-American teen girls who find success through a mix of hard work, grit, high expectations, and dedicated mentorship, Amanda Lipitz’s Step is both engaging and uplifting. It follows the competitive step-dancing team at the Baltimore Leadership School for Young Women, a public charter school with a very ambitious goal: that all of its graduates attend college. Continue reading… \With a particular focus on three members of the senior class as they practice with the team, apply for college, and deal with everything from boyfriends to poverty, the film captures the many challenges the girls face on a daily basis. Ambitious Blessin’s mother is unreliable, and her grades aren’t what they should be. Quieter, earnest Cori loves coding and seems headed for a top-notch school, but only if she can get a huge financial aid package. And forthright Tayla is always under the wing of her protective mom.

Lipitz documents both the girls’ ups — particularly when it comes to their time with the step team — and their downs; under her direction, the everyday moments of their lives are funny, poignant, and relatable. Even though it’s not hard to guess how things will go for the team in the end, its their journey to get there that’s so affecting. Their passion, their focus, their love for their teammates and the art of step dancing; it all combines to create a powerful cinematic experience. —Betsy Bozdech

Susan Wloszczyna: Step is a soul-stirring, foot-stomping and inspirational step beyond most docs that revolve around a competition in that its final showdown is only the beginning of a path towards a brighter future for the participants — namely, members of a step-dance team who are about to become part of the first graduating class of the Baltimore Leadership School for Young Women. This is both a buoyantly uplifting and, at times, tear-shedding celebration of African-American womanhood and the dedicated educators who have their backs. Here the real prize isn’t a trophy but ensuring that each and every senior will head off to college despite the obstacles that they face in their daily lives. It also might just be the most relevant and necessary doc you will see all year.

Sheila Roberts: Amanda Lipitz’s uplifting, tightly paced documentary, “Step,” follows the senior year of the inaugural class of the Baltimore Leadership School for Young Women and their inspiring step dance team as they prepare for an annual competition. Through the eyes of Paula Dofat, Cori Grainger, and Tayla Solomon, we see the challenges they face and the immense impact of family and community. These spirited young ‘Lethal Ladies’ are determined to get into college and they know what it means to struggle and make sacrifices. They direct their hopes and frustrations into making music with their bodies which empowers them to stay positive and focused on their future. The film features a strong female-centric production team that includes several executive producers, editors Arielle Davis and Penelope Falk, and four-time Emmy-winning composer Laura Karpman.

MaryAnn Johanson: Movies about at-risk boys are plentiful. Movies about at-risk girls are so rare as to be almost nonexistent… which makes the inspiring and illuminating documentary *Step* even more necessary. Simply seeing such a wide range of young black girls — each with their own problems and challenges and talents — onscreen is worth cheering. But that their stories here are all about their experimental charter high school, designed to support them and aiming to get them into college, reminds us that investing resources in kids, in girls, in ‘black girls,’ works. Read full review.

Jennifer Merin: Step is a spirited documentary that follows a dance group in an inner city Baltimore all-girls high school, showing how participation in the group raises the aspirations and self esteem of its members. Filmmaker Amanda Lipschitz’ spotlights girls who have a lot of potential, but must deal with a lot of challenges to reach it. The documentary is as entertaining as it is ‘do good.’

Cate Marquis: The inspirational documentary STEP follows a girls’ step dance team at a Baltimore charter high school, both in their quest to win a big step dance competition and to get into college. The story takes place in the shadow of the unrest and protests that gripped Baltimore in 2015 after the death of Freddie Gray. Echoes of Ferguson, Michael Brown and Black Lives Matter are present as well. Read full review.

Pam Grady: A step dance team comprised of teen girls who’ve grown up in hardscrabble Baltimore compete for personal pride as well as team glory in a year fraught with social unrest and personal triumphs and challenges. Energetic dance routines pepper this engaging documentary that lasers in on three high school seniors who are as focused as much on getting into college as they are on competition. As thrilling as the team’s performances are, what animates this documentary and gives it so much often poignant heart are those young women taking the biggest step of all—into the future.